What would it take for celiacs to be able to have their wheat — and eat it too? 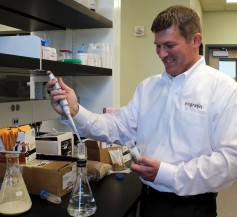 That is exactly what Dr. Chris Miller hopes to achieve in a research project funded by Kansas wheat farmers through the Kansas Wheat Commission.

Miller, the director of wheat quality research at Heartland Plant Innovations, is working to lay the groundwork for creating a celiac-safe wheat — and one that could still make a great-tasting, good-looking loaf of bread.

Miller will literally put these samples to the test — relying on the reaction between human antibodies and wheat proteins.

Antibodies are the defenders of the human body, each developed to remove a specific “threat.” For people with celiac disease, a portion of their antibodies have identified gluten as something that may cause harm to the body. When they consume gluten, antibodies defend, which causes damage to the small intestine. Every celiac sufferer’s sensitivity to gluten is a little different, which is why some just get an upset stomach and others end up in the hospital after consuming gluten.

This means there is not one antibody that reacts to one protein. Instead, an array of human antibodies and their variations react to potentially hundreds of different wheat proteins — or even just fragments of proteins.

To match wheat proteins with the custom-made human antibodies with which they react, Miller will use a process called antibody staining. 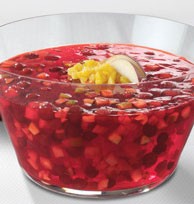 Miller will take all of the individual proteins from one wheat variety and stick them in a gel — like pieces of fruit in Grandma’s prize JELL-O salad. The human antibodies are then washed with a colored stain and then mixed into the gel. If the human antibody finds its wheat protein target – they stick together and show up as a colored band. Proteins without an attached antibody remain invisible, and unmatched antibodies simply wash away. The more dense the color, the more antibodies that reacted, or the higher level of reactivity for that specific wheat variety to human celiac disease.

With this information, Miller can rank each cultivars for their level of reaction. Wheat breeders can use Miller’s rack-and-stack to screen new and upcoming varieties for lower naturally occurring levels of reaction for human celiac disease. [Read more]

Step Two: Down to the DNA

Each person’s immune system has different antibodies, however, so Miller must identify any wheat protein fragment that could potentially react to any one person’s antibodies and create a celiac reaction. 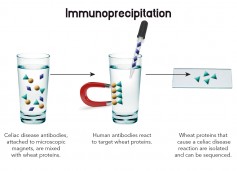 To find the exact epitopes, or protein fragments, that react to human celiac disease antibodies, Miller will use a process called immunoprecipitation. In this process, a single antibody is adhered to the surface of a microscopic magnetic bead. The miniature magnets are then fixed to a surface — like hundreds of super tiny magnets stuck to a fridge.

Then, the proteins from a single wheat sample are washed over the surface. The reactive proteins stick, the others simply wash away.

From there, Miller can isolate and sequence the reactive cereal proteins. These sequences provide targets to sequence the specific genes that cause a human celiac disease reaction. [Read more]

At the end, Miller will have created the most comprehensive study of wheat proteins related to celiac disease ever published.

As Miller said, “This is a huge contribution to science — not just to Kansas, but to all of human health.”