Wheat streak mosaic is one of the most economically devastating wheat diseases in Kansas and the Great Plains. Preliminary estimates for the 2019 crop year indicate that losses were low this year, at only 0.3% statewide. There were a few localized outbreaks of WSMV in the west central and northwest crop reporting districts. Control of volunteer wheat is the best way to prevent wheat streak mosaic virus losses in the wheat crop.

According to the Kansas Cooperative Plant Disease Survey Report, September 28, 2018, wheat streak mosaic virus complex (WSM) was the third most important disease of 2018, at 0.07% estimated loss statewide, or 194 thousand bushels.

After such a high loss in 2017, with some observed wheat fields suffering as much as 100% yield loss, farmers may have better controlled the volunteer wheat in post-harvest 2017. This would have decreased the ability of the wheat curl mite to survive between 2017 harvest and planting, which would have better controlled the disease spread. In addition, there was a much more rapid transition to cool temperatures in the fall of 2017. These cold temperatures in October and November likely reduced the activity and movement of the wheat curl mites.

In 2018, WSM only caused detectable yield loss in two crop reporting districts, the Northwest and the West Central districts, causing 0.2% and 0.4% loss respectively.

The disease is most common in the western portion of the state, with sporadic outbreaks in central and eastern Kansas.

In 2017, central and western Kansas had above average disease intensity. 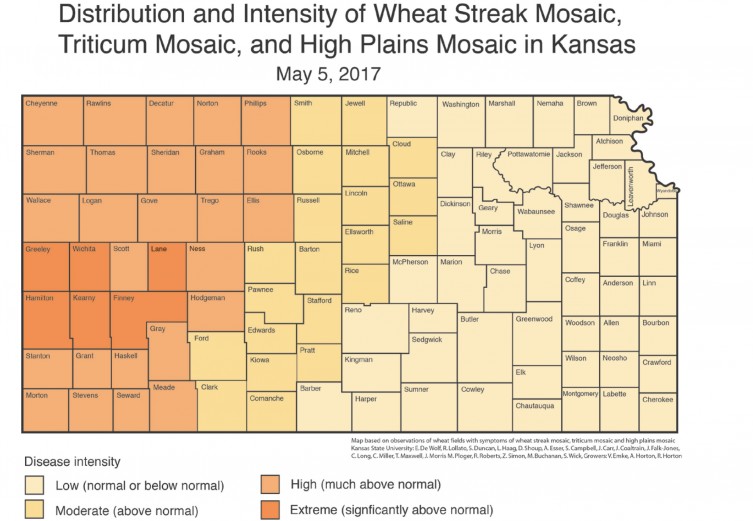 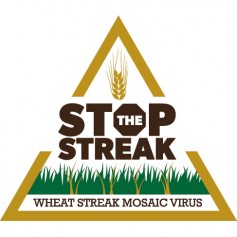 There are basically only three ways to control the spread of wheat streak mosaic:

Research is headed down the path of genetic resistance, and Kansas wheat farmers should know that help is on the way. However, there are only a few varieties with moderate resistance at the current time.

The WSM3 gene, which was discovered by Bernd Friebe at the Wheat Genetics Resource Center (WGRC) at Kansas State University, comes from wild relatives of wheat and is resistant to not only Wheat Streak Mosaic Virus, but it also provides protection from Triticum Mosaic Virus and High Plains Mosaic Virus as well. Another benefit of WSM3 is that it is not temperature sensitive, which has been a weakness in the current sources of resistance. This research is being partially funded by Kansas wheat farmers through the Kansas Wheat Commission’s two-penny wheat assessment. The WGRC is housed at the Kansas Wheat Innovation Center in Manhattan.

To learn more about this disease, how to control it and about research projects being done at Kansas State University, visit the links below.