Kansas farmers help feed the world, from grocery stores in their own towns to school children in Nigeria. But, they will need every resource available to meet the challenge of feeding an ever growing population, especially if new United Nations (UN) projections are realized.

The UN report, World Population Prospects: 2015 Revision, predicted that the world population will increase to 9.7 billion by 2050, nearly 25 percent more than the current global population. And by 2100, the UN now expects 11.2 billion could occupy the planet.

The largest increase in population will occur in either countries with high fertility rates – located primarily in Africa – and countries with existing large populations – principally China and India. Africa alone will account for more than half of all population growth between 2015 and 2050, according to the UN. 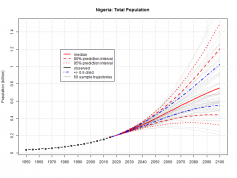 These projections have important implications for Kansas wheat farmers. Nigeria is a top customer for Kansas hard red winter (HRW) wheat, importing 58.4 million bushels in the last marketing year. Already the world’s seventh largest population, the UN projected that Nigeria will surpass the United States in total population by 2050, jumping up four spots to the third largest country in the world.

Nigeria is indicative of a problem for world wheat demand. Many of the fastest growing populations in this report are located in tropical and sub-tropical regions, where growing wheat on a large scale is difficult. That means farmers in temperate zones – like Kansas – will need to grow ever more productive wheat, just to keep up with the additional mouths to feed.

The same is true in countries that can produce wheat. For example, China and India are already the world’s largest producers of wheat, but both import wheat to help meet quality and end-product specific demand. Farmers there will need advanced technology and improved infrastructure to meet challenges in their own countries and farmers here will need the same to fill the gap between domestic production and demand.

In addition, the UN also reported that as the world’s youngest generations become the world’s workers, they have the potential to grow not only in number, but also in prosperity.

According to the UN report, “As the current generation of young people transforms into a productive and relatively large population in the working age range, there is a prospect for rapid economic growth that can help to lift populations out of poverty and into a more prosperous future.”

Luckily, Kansas farmers are already investing in the tools they will need to feed the UN’s predicted population. Each year, through Kansas Wheat, farmers invest nearly $2 million in research projects on wheat breeding, quality, disease screening, insect research, phenotyping, genotyping and so much more. The Kansas Wheat Innovation Center is a hub of innovation, driving further productivity and profitability growth for Kansas farmers. And the U.S. Agency for International Development (USAID) Feed the Future labs located at Kansas State University are working to take these Kansas resources global.

If the world does reach 9.7 billion by 2050, as the UN now predicts, Kansas wheat farmers will stand ready to help feed them.