Chris Tanner finished top-dressing his wheat on Tuesday in northern Kansas, pondering whether fertilizing was a fool’s errand. According to the Kansas Mesonet, the Norton substation has measured 161 days without more than a quarter inch of rain — more than five months. The area has virtually zero subsoil moisture, and drought conditions are expanding with no relief in the forecast.

“While I was out top-dressing the wheat, I was wondering why I was out spraying the wheat,” Tanner said. “You dig down under this wheat, and it’s just dry, dry, dry.” 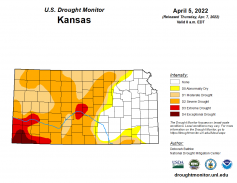 April showers are critical for the 2022 wheat crop. According to the U.S. Drought Monitor, more than half of the state is in severe drought or worse, with pockets of extreme and exceptional drought spreading into the corner of southwest Kansas. Surrounding states are equally or worse off, except for Nebraska.

Less than 45 minutes east of the Colorado border, Gary Millershaski reported the wheat in central Kearny County is hit with dry pockets, poor emergence and little tillering. Looking at the Palmer Drought Severity Index, Kearny County is a splotch of dark red — indicating severe drought. Two snows and one rain event in the last month all amounted to a quarter inch to 30 hundredths of an inch of moisture.

However, just an hour to the northeast in Dighton, Ron Suppes reported wheat stands are looking better than last year, with a few spots that either didn’t emerge or suffered from winterkill. Subsoil moisture currently measures around two feet, thanks to 1 to 1.5 inches of moisture since October that came over a series of snows and light rain. Still, Suppes said more timely rains are needed to put a normal yield in the bin. 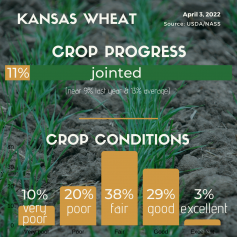 While moisture is the current limiting factor for this year’s harvest, the outlook is more nuanced than measuring the dust or raindrops in the gauge. According to Kansas Crop Progress and Condition report on April 4, issued by USDA’s National Agricultural Statistics Service (NASS), the winter wheat crop is holding steady at 30 percent very poor to poor, 38 percent fair, and 32 percent good to excellent.

That holds for Tanner, who farms so close to the Nebraska border he can practically see it from his house. Winter wheat acres are up in his area, thanks to decent moisture last fall that put out a good stand. Producers in the area are even adding spring wheat into their rotations. He and others also went ahead with top-dressing, many having locked in fertilizer last fall when prices were lower and taking advantage of the area’s heavy clay soils that help stash away nitrogen for a rainy day. But that day needs to come soon.

“This is one of the nicest stands of wheat I’ve seen in a while, but it needs a drink real bad,” Tanner said. “An inch of rain would buy us a lot of time. But if we don’t get it in the next 10 days, we will be in trouble.”

Even Kansas producers who have received good moisture still would like to see more during this critical growth period for the wheat crop. Jay Armstrong farms in Atchison County, a short half-hour outside Kansas City. The wheat in his area looks excellent, having received about two inches of moisture in the last month. While his outlook for harvest is good right now, he agreed more moisture is needed in the next two weeks to keep the momentum going for this year’s crop.

The same is true for Martin Kerschen, who farms near Garden Plain in south-central Kansas. He received an inch of moisture last week, continuing to fuel an above-average-looking crop. With higher prices on the board, farmers upped acres slightly in the fall and have top-dressed their wheat this spring, even with higher input prices.

While he is grateful for the moisture, he reported two to three inches more will be needed to make the crop, especially double-cropped wheat after soybeans.

“If Mother Nature plays her hand out with moisture blessings, we’ll have a decent poker hand,” Kerschen said. “Don’t want to jinx our crop though!”