On January 29th Kansas will celebrate the 154th anniversary of its statehood. When the first settlers roamed the prairies of the territory, they probably never imagined that the land they were in would one day become known as the “Wheat State.”

The first wheat crop in Kansas was grown at the Shawnee Methodist Mission near Fairway in Johnson County in 1839. Production spread westward as the territory was settled eventually becoming a state in 1861.

In the beginning, wheat didn’t grow well in Kansas. Initially, the spring wheat varieties grown on the plains suffered because of the hot, dry summers. Yields were low and many doubted that wheat would ever be able to grow successfully in this challenging climate. 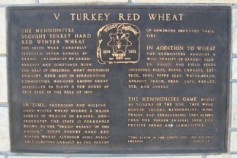 In 1874, Russian Mennonite immigrants introduced Turkey Red wheat to Kansas. This hardy variety was planted in the fall and could withstand Kansas' cold and dry winters. The new wheat could take advantage of the moisture that arrives in the winter and early spring and then be harvested in early summer. This introduction revolutionized the wheat industry in Kansas, and Turkey Red wheat is now the ancestor to all Hard Red Winter Wheat varieties grown across the plains today.

T. C. Henry, a pioneer of the Kansas wheat industry during its formative years, predicted that "winter wheat will doubtless be the great staple of our country" and encouraged farmers to plant winter wheat. A combination of his advocacy and a series of disasters plaguing spring wheat and corn cemented winter wheat into the history books of Kansas. He helped build the foundation for what is now called the “breadbasket of the world.”

Kansas wheat farmers have survived many challenges to maintain Kansas as the “Wheat State.” The 1930’s brought the Dust Bowl to the Great Plains and the Great Depression took its toll on farmers. In addition to the drought, leaf rust attacked the crop of 1935, making a wheat farmer’s survival even harder. At this time the United States was a net importer of wheat and feed grains.

When the government passed the Bankhead-Jones Agricultural Research Act, doubling the federal support for research and extension work on the farm, things started to get better. The technological boom that followed in the 1940’s allowed producers to move from horses to tractors and adopt technological practices.

Technology and improved varieties increased production and added interest in agricultural exports. These changes moved the United States from an importer of wheat to a net exporter with Kansas leading the charge.

Kansas continues to be one of the largest producers of wheat in the U.S., and is the largest flour milling state in the union. The Kansas wheat industry is a vital part of Kansas’ economy contributing about $3.6 billion to the economy in 2013 and by supporting about 30,000 Kansas jobs.

With all this wheat, Kansas produces a lot of bread. 36 billion loaves of bread could be baked with the wheat grown in Kansas each year. That’s enough to feed everyone in the world for two weeks!