Knopf Farms is one of three new sites in the Soil Health Partnership (SHP) network, through a partnership with the National Wheat Foundation, that is evaluating the impacts of diversified crop rotation and how wheat can benefit the soil and other environmental indicators.

“We see soil health as a foundational part of the equation that we need to build resilience,” Justin Knopf said.

Justin farms in Gypsum, Kansas alongside his dad and brother. They grow wheat, corn, soybeans, grain sorghum, alfalfa and triticale. They utilize multi-species cover crops between the grain crops.

Wheat is an important part of the Knopf’s crop rotation.

“It removes a lot of carbon dioxide from the atmosphere and stores it first in the residue and then in the soil. Also, as a high carbon residue, it gives us good protection on top of our soil,” Knopf said. “It's important to us to be growing a mix of crops that are both summer annuals and winter annuals, to have increased diversity in our cropping system.”

“Our weather is really unpredictable. We know here in Kansas we're going to be limited by water at some point through the year, although 2019 was an exception with the extreme amount of rainfall we received. Growing a winter annual within our crop mix helps spread our weather risk, making our cropping system more diverse and therefore more resilient,” Knopf said.

Knopf will be conducting an enhanced practice trial on their SHP plot over the next five years where a cover crop trial that will consist of adding a cover crop to any open window between grain crops is compared with the same system with no cover crops.

“The enhanced practice will have continuous living roots in the cropping sequence. So, any time we harvest a grain crop, we will shortly thereafter be going back through and seeding either a cover crop or the next grain crop,” Knopf said.

This research will allow Knopf to compare how extending the growing season with cover crops, and how maintaining living roots in their soils for a longer period of time each year affects their unique crop rotation.

In the fall of 2019, soil tests that will serve as baseline measurements were taken and the entire field was seeded in wheat. After wheat harvest, the control strips will remain as residue while the trial strips will have a multi-species cover crop seeded into it. The intended crop rotation will then be wheat, sorghum and then soybeans.

At the end of the trial, what does success look like? Knopf has three factors he would like to see.

“I would want to see that we've increased our soil carbon across those five years, which means we remove carbon dioxide from the atmosphere. I consider it to be the energy currency of the biological system. So the more carbon we have in our soils, the better they will be functioning in general,” Knopf said.

Knopf would also find the practice successful if a more robust and diverse biological population was present through increased earthworm counts and higher fungi to bacterial ratio recorded. 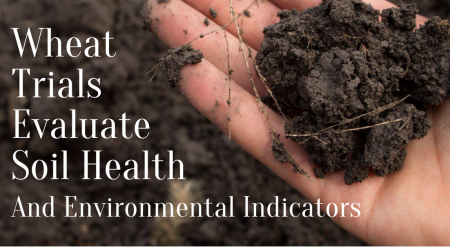 He hopes to see soil characteristics improved as well through increased soil aggregation and greater aggregate stability. “That would give us better water infiltration and storage ability in our soil.”

He noted, “The outcomes from yield, increased resilience, improved soils and the costs that we incur from the enhanced practice of utilizing cover crops need to balance to be economically feasible,” Knopf said.

Knopf hopes to utilize what he learns from his SHP plot to scale the practice to more acres in their operation.

“I’m looking forward to better quantifying the value and soil health improvement that comes through incorporating cover crops into my rotation,” Knopf said.