On Wednesday, 75 people on the Wheat Quality Council’s 2019 winter wheat tour in 20 cars made their way from Colby to Wichita, Kansas, stopping in wheat fields along six different routes. One route included a trip to northern Oklahoma, as well.

While everyone thinks of Kansas wheat being used mainly for breads, it’s not just bread bakeries on the tour. Other participants included grain companies, flour mills, government agencies, wheat growers and other food manufacturers.

Also on the tour were several Kansas wheat farmers, including Gary Millershaski of Lakin, who were able to interact with these major customers and tell them the story of the American farmer.

Wednesday’s 20 cars of wheat tour scouts made 200 stops at wheat fields across western, central and southern Kansas, and into northern counties in Oklahoma

Scouts reported seeing widely varying wheat conditions (due, in large part, to planting date) along the route. While there were sightings of rust and other disease in south central Kansas, many stops saw signs of nitrogen deficiency, a common nutrient deficiency that could be remedied by fertilizer applications. However, many producers are choosing not to apply fertilizers due to decreasing wheat prices and increased input costs. This year the yield bump with fertilizer application may end up costing producers more than they would gain.

“The wheat that looks good looks really good,” said Millershaski. “But there are a large chunk of fields that weren’t able to be planted in a typical timeframe. These fields just aren’t developing normally, there’s no root structure. I can see the potential for a lot of abandoned acres. We’re going to need every acre harvested that we can get to be right at an average crop year.”

The next few weeks will be critical for the crop. Dr. Romulo Lollato, Kansas State University wheat extension specialist, reported seeing signs of leaf rust in the lower canopy in Ford and Edwards counties, but saw both nitrogen and sulfur deficiencies consistently along the Highway 50 route. One tweet from Hodgeman County showed a substantial difference in growth and development in neighboring fields. Non-typical planting dates have been at the forefront of conversation for Wheat Tour 19 with the visible variability in field development evident even to the untrained eye. Tour participants now have a hands on experience showcasing the volatility of Mother Nature and the impact it has on our nation’s wheat farmers.

The calculated yield from all cars was 47.6 bushels per acre, but at the Wednesday evening wrap-up meeting, tour scouts again talked about the wheat being behind schedule and very small.

Mark Hodges from Oklahoma reported that the state’s production is estimated at 119.27 million bushels with 37.38 bushels per acre. Approximately 4.2 million acres were seeded last fall.

Wheat Tour 19 continues Thursday with six routes between Wichita and Manhattan, Kansas. Follow along with the tour at #wheattour19. A final production estimate will be announced Thursday afternoon. 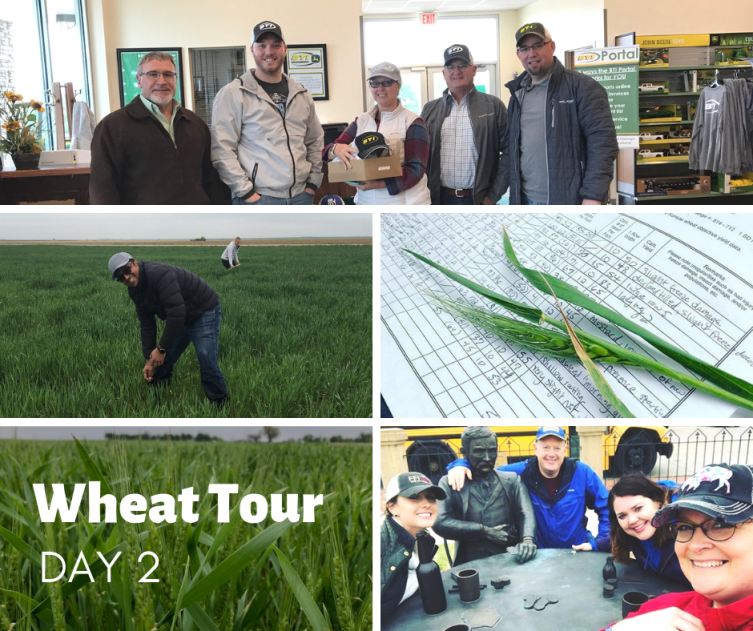