Dr. Erick De Wolf, professor of plant pathology at Kansas State University, was the keynote speaker and his topic was a timely one – “Wheat Streak Mosaic, an old enemy with devastating impact.” The viral disease caused a conservative $76.8 million in direct losses to wheat farmers this year alone, a loss of 19.2 million bushels of wheat.

De Wolf said that from a historical perspective, Wheat Streak Mosaic annually causes yield losses of 1.5% up to this year’s 5.7% yield loss.

But why was Wheat Streak Mosaic so bad this year?

De Wolf said it was a combination of management practices and the environment. 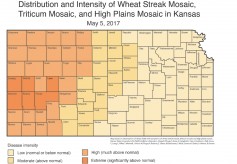 Fall weather conditions were ideal for the spread of wheat curl mites, which carry the disease and the Wheat Streak Mosaic Virus. Mild fall temperatures favored the continued spread. In addition there was no hard freeze until late November in many areas.

De Wolf says the best way to get rid of Wheat Streak Mosaic is to control volunteer wheat, as volunteer wheat is the most common host of the virus and the curl mite. Volunteer wheat can be removed with herbicides or tillage, but it’s absolutely essential to “allow time for herbicides to work,” he said.

“Volunteer wheat must be dead and dry for two weeks prior to planting,” said De Wolf. “It’s necessary to have a wheat free period, and you should watch out for volunteer in sneaky places, such as in double crop and cover crops.”

“If your volunteer wheat is dying right at the same time as your newly-planted wheat is emerging, where do you think those mites are going to go?” De Wolf asked. “If conditions are right, they will move directly into the newly-emerged wheat.”

Kansas wheat farmers can also help stop the spread of the disease by choosing wheat varieties with the best available resistance and by avoiding early planting.

De Wolf said there are WSM2 resistance genes available now in wheat varieties Oakley CL and Joe, but the resistance isn’t as effective at temperatures above 70 degrees F. He also pointed out other varieties – TAM 112, Byrd and Avery – slow the development of mite populations.

By avoiding early planting, Kansas wheat farmers are able to avoid times when wheat mite populations are the highest in late summer and to decrease the interval between planting and fall freeze events.

But De Wolf acknowledges that in many areas, planting has to happen when moisture is available.

“When we say avoid early planting, we’re not talking about planting outside of the window for success of your wheat crop,” said De Wolf. “We’re encouraging you to plant on the later side of the recommended planting dates.”

There is good news when it comes to the future management of Wheat Streak Mosaic.

De Wolf said that improved genetic resistance is being developed at KSU. The WSM3 gene, which was discovered by Bernd Friebe at the Wheat Genetics Resource Center (WGRC) at Kansas State University, comes from wild relatives of wheat and is resistant to not only Wheat Streak Mosaic Virus. This resistance gene also provides protection from Triticum Mosaic Virus and High Plains Mosaic Virus as well. Another benefit of WSM3 is that it is not temperature sensitive, which has been a weakness in the current sources of resistance. This research is being partially funded by Kansas wheat farmers through the Kansas Wheat Commission’s two-penny wheat assessment. The WGRC is housed at the Kansas Wheat Innovation Center in Manhattan.

At this point in time, there are no chemical options such as insecticides or pesticides that are effective at controlling the wheat curl mite. In addition, De Wolf says that the wheat curl mite can move a least a mile, and in some cases more.

“The best way to get rid of Wheat Streak Mosaic is to control volunteer wheat,” De Wolf said.

Additional event coverage will be available at WheatU.com and in a future issue of High Plains Journal.