Use the following information to scout wheat fields and make your own yield estimates. To help, we have compiled the steps tour participants use to estimate yields so you too can participate. Justin Knopf, wheat farmer in Saline County, provided some helpful hints he and other farmers use when evaluating their fields.

How to Estimate Wheat Yield and Conditions:

Step 1: Find a wheat field. If you are not a farmer or landowner, call a farmer friend. Above all else, be respectful of other people’s property. 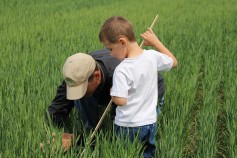 Step 2: Pick your scouting spot. Wheat farmer Justin Knopf suggested going further out in the field than the first few rows, called end rows. This is where equipment often overlaps and farmers load out their trucks near field entrances, both of which can affect tiller count.

Step 3: Observe general field conditions. Do you see weeds? Does the field have an odd color (yellow or blue)? Is the wheat stand uniform or are there bare patches in the field? How thick or thin is the canopy (where the leaves from one row touch the other, same as in a forest where the trees touch each other)?

Wheat Tour Tip: Old farmer’s scouting trick: Throw a hat into the field. If the wheat holds it up, it is generally a good, thick stand. Watch the wind!

Wheat Tour Tip: Color can be an indicator stress, which will reduce yield. A yellow cast can indicate a lack of nitrogen or drought stress. A blue cast indicates drought or heat stress. 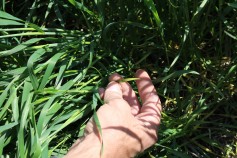 Wheat Tour Tip: Yellowed leaves at the bottom of the plant are not necessarily indicative of reduced yield. But, yellow patches on the upper leaves with red spots (pustules) can indicate stripe rust . 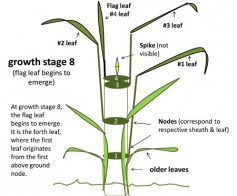 Step 4: Measure the height of the wheat plant. By this time of year, wheat should be well above your knee.

Wheat Tour Tip: If the wheat is not taller than a rusty can you found in the ditch, it is abnormally short and will be very difficult to harvest. 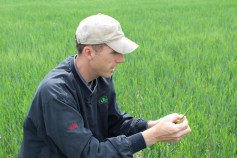 If the wheat head has emerged, count the rows of spikelets (covering of the wheat kernels). Knopf said he generally looks for 12 or more in a row for a good stand of wheat. Do not count the bottom or the top. This is the maximum potential the wheat plant has at this point of growth. 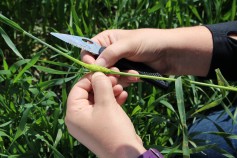 If the wheat head has not emerged, slide your hand up the stalk. You will feel a bump, called a node, toward the middle third of the plant. Use your pocket knife to slice open the stalk just above that node and you should find the immature wheat head. 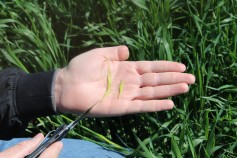 The wheat head should look green, not white, and be soft, but not mushy.

While the above steps help gauge the general health and conditions of the wheat field, the next steps will be how you formulated projected yield. So, get out your handy yardstick!

Step 6: Measure the distance between wheat rows in inches. Express any fractional parts of an inch as a decimal. Record on your yardstick or notepad.

Wheat Tour Tip: The most common spacing between rows is 7.5 or 10 inches. 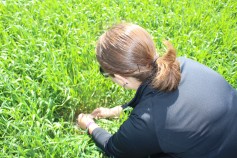 Farmer Tip: Officially, all stalks should be counted. However, Knopf said that secondary tillers (short ones that will feel more like a blade of grass than solid like a tree trunk) are unlikely to mature in time to produce grain at harvest. You decide.

Step 8: Calculate yield, using one of two methods. (formulas below provided by USDA/NASS) 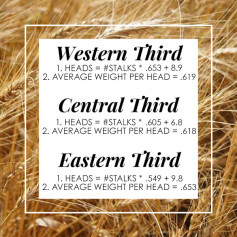 Originally published May 4, 2015, Written by Julia Debes, Updated with 2021 formulas.