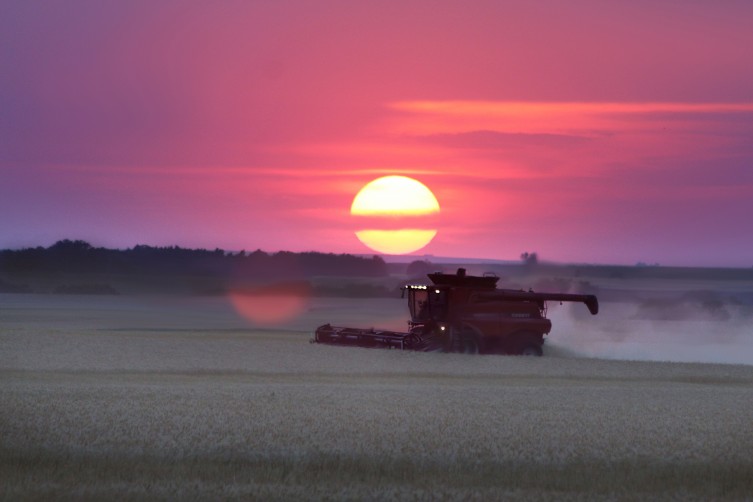 From the way it is grown, harvested and processed into flour, and the way it’s entwined in the lives of the families who produce it, wheat’s journey is an emotional one. In a time where agricultural practices are questioned at every turn, it’s important to look at what’s being done to keep our food safe while conserving the environment and providing enough food for the earth’s inhabitants. Farming also is not a job that can be clocked out of at 5:00 p.m. every day, and sometimes it requires all hands on deck. It’s a family business and a way of life.

No residues, no-till, no worries

A common misconception among consumers is that their food supply is tainted by chemicals applied to crops to control weeds and pests and is unsafe to eat. This simply isn’t true. In fact, for a farmer, applying herbicides and pesticides to crops is much like applying Miracle Grow fertilizer to your backyard garden. Just as you would wash your home-grown vegetables before eating them, measures are taken to make sure none of the chemicals spread on wheat fields end up on your table.

To make sure chemicals don’t linger on the wheat taken to the elevator, a period of time has to be allowed before starting harvest.

“There are intervals you have to wait before you can harvest. In the case of the fungicide I used, you can’t harvest until 30 days have passed. In my case it’s been more like 45 so there’s really no residues left at this point,” said Michael Jordan, a Kansas wheat farmer from Mitchell County during the 2016 wheat harvest. “It runs down pretty quickly and really only lasts about two weeks. 30 days is a pad for safety purposes.”

“I’m a no-till farmer. This particular field has not be tilled since 1999. You’re looking at 16 years of accumulated mulch from the crops that I’ve grown. Mulch laying on the soil keeps it cooler, helps prevent wind erosion and holds moisture,” said Jordan.

Cultivating the land and harvesting a crop takes long hours and several helping hands. Wheat harvest time is especially busy because, once the wheat turns dry, it’s a rush to get the grain in before it rains again.

“Our daughter and son-in-law came back about a year and a half ago to the operation,” said Dean Stoskopf of Barton County. “I’ve had a hired man that’s worked for me for 23 years now and he’s had one son that’s worked for me part-time during the summer and then right now his two younger sons are helping. At times there’s four from his family that are working for us during harvest time.”

Harvest brings families together and it’s what children remember for generations to come.

“Family is a big part of the harvest. It’s just something that you kind of look forward to. Even those that aren’t always here on the farm on a daily basis; they’ll show up to help with harvest,” said Joe Kejr, Ottawa County wheat farmer. “We actually live in the house I grew up in so we are a family operation and it has been a historical part of our family farm.”

Joe’s wife Geena gives a glimpse into the work and support a farm wife provides during harvest.

“During wheat harvest I definitely get to be one of those gofer people and help move field to field and pull a header. But also my big role is to get the guys fed at night. We pack a cooler for lunch for noon and try to have supper out to the field between 6 and 7 p.m. and then trade off and keep those machines rolling. Counting the fifth generation on our farm, we feed about 20 people a night.  When we’re trading out, I shift out the grain cart drivers so they get to eat,” said Geena.

Where does wheat go after harvest? We know that wheat is ground into flour but how does this work exactly? After Kansas wheat is harvested and taken to the elevator, it is either shipped by train to Mexico or the Gulf to be exported, or to flour mills within the states. At the mills, wheat goes through a cleaning process to separate any impurities such as corn, chaff or soybeans that might be in the grain.

“We use air to aspirate the dust. We use large screens and small screens to separate large and small impurities.

The vibratory action of the cleaner helps to aid the material moving over the tops of the screens,” said Mark Fowler, President of Farmer Direct Foods, a flour mill in New Cambria, Kansas.

Once the wheat at Farmer Direct Foods is cleaned, it is stone ground into flour, packaged and shipped to grocery shelves across the country.

The 2016 Kansas wheat harvest will soon come to a close, but farmers are already making decisions about next year’s crop. They will need to decide what varieties they will plant based on how well their crop this year handled the weather, pests and diseases thrown at them. Although 2016 was a good year for Kansas wheat yields, farmers and their families will begin preparing for whatever 2017 brings.