Digging holes in the ground may not be the average person’s idea of empowerment, but National Geographic photographer Jim Richardson did just that in order to illustrate the variance and importance of soil profiles and farmers around the world. Richardson shared his insights from that project and more than 20 years of researching and capturing agriculture’s stories with participants at the 2015 Women Managing the Farm Conference. 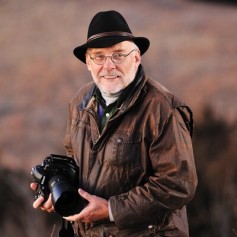 Richardson is a Kansas native, growing up on a dairy in Republic County. He recalled feeding bucket calves and watching his mother crochet while milking cows. From these humble beginnings, he built a distinguished career with National Geographic, most recently helping photograph and research The Future of Food series.

Richardson recounted photographing the ancient agricultural world at ruins and modern production from the slopes of Peru to the soybean fields of Iowa. He shared his images of the rolling fields in the Palouse to wheat harvest in his home state.

“I cannot tell you how to farm,” Richardson said. “But, I have traveled the world and I can show you what farms look like.”

With the global population expected to reach nine billion people by 2050, he said the most important question is how agriculture can double production to produce the food needed to feed that many mouths. To answer that question, Richardson said that it requires perspective and focus on elements like soil, seeds, farms and farmers.

Richardson said that the large farms typical of the United States are atypical on a global scale, where 50 percent of farmers farm on less than five acres of land. Similarly, much of agricultural work is still done by hand – the same way it has been done for thousands of years.

“The amazing thing is the transformation of the planet,” Richardson said. “Most of that was done by hand.”

His said his work capturing soil profiles and farmers highlights how farmers must be partners with their crops and livestock, lest more land fall victim to the soil erosion that has devastated ancient areas of productivity like Aleppo in Syria and the Loess Plateau in China. In contrast, Richardson also showed the hard work of modern farmers to conserve and restore soil in countries like Niger. 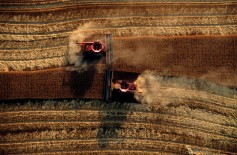 Richardson also highlighted the importance of preserving seed diversity to meeting current and future agricultural challenges. To do so, he shared images of seed banks in the Arctic Circle to Fort Collins, Colorado, even highlighting the work of Dr. Bikram Gill and the Wheat Genetics Resource Center (housed at the Kansas Wheat Innovation Center).

“If a global catastrophe would happen, this would be the back-up,” he said. “It is essential to have all this diversity because you never know when something like Ug99 is going to come around and threaten the world’s supply.”

Above all, Richardson said the farmer is “the glue that holds it all together” and thanked the audience for their efforts to help preserve, protect and improve their shared planet – on the farm and off.