While Cuba and the United States have historically had rocky trade relations, President Obama's announcement on December 17 that the United States would renew diplomatic relations could signal more wheat sales for Kansas farmers.

“U.S. wheat farmers are excited about the prospect of exporting more wheat to Cuba,” says National Association of Wheat Growers (NAWG) President Paul Penner, a wheat farmer in Marion County, Kansas. “NAWG has long supported strengthened trade relations with Cuba and sees this as a historic step in that direction.”

"Since we do have an 80% market share in the Caribbean, I think we could have that kind of relationship with Cuba under normalized trade," said Justin Gilpin, Kansas Wheat CEO.

Cuba could import at least 500,000 metric tons of wheat from the United States each year but has not purchased U.S. wheat since 2011. Under the current embargo, the United States can export agricultural products to Cuba through the use of third-party banking institutions, which makes facilitating trade burdensome and often more expensive. 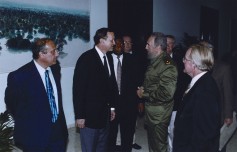 Kansas Wheat, U.S. Wheat Associates (USW), and U.S. farmers have worked for years to open up the Cuban wheat market, including meetings with Cuban leader Fidel Castro and trade missions to the island nation.

On January 8, 2002, the first shipment of hard red winter (HRW) wheat in more than 40 years left the Port of Galveston, Texas, and began a beneficial trade partnership. That first shipment contained wheat from Kansas, Texas and Oklahoma, and was the beginning of a total first shipment of 2.6 million bushels.

That trade partnership continued until 2010. During those years of trade, Cuba was a dedicated buyer of U.S. wheat, purchasing up to 70 percent of their wheat imports from the United States.

As that first shipment left the dock at Galveston in 2002, an expert flour miller funded by the Kansas Wheat Commission was on his way to demonstrate HRW milling techniques. Elie Posner, a U.S. Wheat Associates milling consultant, provided the technical assistance.

“It was a very interesting experience to work with the Cuban millers,” said Posner. “The HRW wheat performed well after changes were made, and it gave the millers hands-on experience in new approaches to milling technology of which they were isolated from.”

Kansas wheat farmers have much to gain with an improved trade relationship with Cuba.

“The U.S. wheat industry applauds these actions, which take concrete steps away from a policy approach towards Cuba that has accomplished little,” said USW President Alan Tracy.