He started farming in high school when his uncle rented him ground. A fifth-generation farm daughter herself, she was driving farm trucks before she had a driver’s license. After meeting in college at Kansas State University, they found a way to farm across county lines, balance her necessary off-farm income with the ebb and flow of farming and — most importantly — raise two exceptional children. Now, following a season of last farm milestones and a farm machinery sale, Randy and Kim Fritzemeier are off to a new set of adventures with a binful of goodwill from the family and friends with whom they have shared their love of agriculture and community.

After both growing up as farm kids, Randy and Kim established their own farm family with kids Jill and Brent on the county line between Stafford and Reno counties. Randy, as a fifth-generation farmer, raised wheat, alfalfa, sudangrass and cattle. Kim works as the central Kansas reporter for KFRM 550 AM and operates her blog called Kim’s County Line, where she posts everything from the routines of farm life to fun recipes. Kim started her blog in 2010 as a combination of wanting to serve as an agvocate, flex her journalist mental muscles and pursue her photography hobby.

“One of the reasons I’ve continued to do it is that I want our story to not have special interest groups or restaurants tell the consumer what we are doing. Plus, I feel like I can share the beauty of what we experience around here.”

In addition to their careers, the couple is heavily involved in their community and Kansas agriculture. Randy has served on the Kansas Association of Wheat Growers board of directors, Kansas Wheat Commission Research Foundation, Kanza Co-op Board of Directors, the Ark Valley Cooperative Nominating Committee and the Stafford County Farm Bureau Board of Directors. Both he and Kim have been active members of the Stafford First United Methodist Church and have been excellent 4-H leaders in Stafford County for years. Together, the couple was honored as a Kansas Master Farmer and Master Farm Homemaker in 2013 and they just completed their second year as the presidents of that organization.

“We both have enjoyed connecting with other farm couples, just the organization of like-minded people who are also interested in agriculture, family and community service,” Kim said.

“I always enjoyed visiting with people from other parts of the state,” Randy said. “We had people that didn’t have a lot in common. Maybe not everyone agreed on everything, but I like people that have different opinions but respect. We made some friends out of it.”

Throughout his involvement in the wheat industry, Randy has been a perpetual student. He recalled his first meeting with the Kansas Wheat Commission Research Foundation, where they handed him a great, big notebook of proposed wheat research projects and his mind was blown by the details of projects researching exact genes on specific chromosomes.

Helping with the Kansas Wheat booths at the State Fair and helping with the National Festival of Breads also allowed Randy and Kim to connect with others from across the state and the country.

“I’m always kind of intrigued with the people that come, especially those who aren’t from the Midwest,” Kim said. “It’s such a thrill for them to ride the combine and interact with farmers and learn more about the crop. It’s gratifying to have them so excited and enthused about it.”

Working with school children through Kansas Wheat has been another highlight for Kim, including talking about farming to local second-grade classrooms, school library programs and other community programs.

“I went to (my granddaughter) Kinley’s first-grade class when they still lived in Manhattan for Kansas Day,” Kim shared. “I shared my farm-themed ABC and counting books with them. I mailed copies to my other granddaughter Brooke’s kindergarten teacher during COVID-19 two years ago for Kansas Day. So we’ve connected with younger consumers in fun ways too!”

Deciding to Leave a Legacy

Randy and Kim’s own children are now grown and have families and well-established careers of their own. While Jill’s children are happy farm helpers and appear frequently on Kim’s blog, neither Jill nor her brother Brent was destined for work as full-time farmers. So, Randy and Kim made the difficult decision last year to retire after the 2022 wheat harvest.

“Randy felt strongly that this was the time,” Kim shared. “When we were in the combine, he was talking about not going to miss scooping wheat out of a hot metal grain bin in August to get it clean.”

“And I told him, I’m also not going to miss — as I’m running the PTO — wondering if he’s having heat stroke in there. He was the one having to do all of that because we didn’t have somebody younger to do it.” 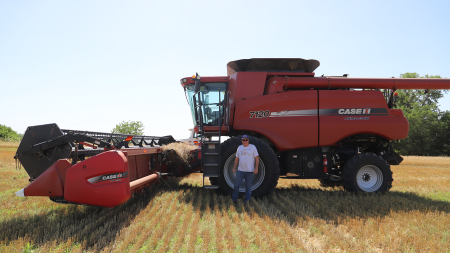 Randy Fritzemeier stands beside his combine during his final wheat harvest in 2022.

Unfortunately, although Randy is an amateur magician, no amount of magic could help him end his final wheat harvest this year with a bang. He had to replant fields due to significant rainfall during planting, but then the weather turned so dry that a windstorm in December filled the house with dirt. Yields were lower than average in the low 30s bushels per acre. But, rainfall in the spring did bring just enough rain while the kernels were filling to finish off the crop. As a result, the wheat was some of the best quality he had cut, providing a ray of sunshine in an otherwise disappointing send-off.

After wheat harvest came sorting through generations of old farm equipment, tools and farm memorabilia that were sold during a farm equipment sale this August, the official end of Randy and Kim’s role as full-time farmers and the start of their next chapter.

“...Our farm sale and retirement ended Randy's immediate family's involvement in active farming,” Kim wrote on her blog on August 23. “We will still be involved in agriculture as landowners, and we have no plans to sell farm or pasture ground at this time.”

“Was it an easy decision? It was not. But it was the right decision for us.”

Kim’s family is still actively farming in Pratt County. Randy found a younger neighbor to take over the bulk of the operation in Stafford and Reno counties. Randy will provide the cattle and the pasture, and the neighbor will do the labor and feeding, keeping the couple involved in the operation. For Randy and Kim, helping a younger farmer get his career going is a fitting legacy after Randy’s uncle gave him his start in the farming business.

“We’re never not going to care about agriculture, people in it and its impact,” Kim said. “I can’t imagine that ever changing.”

Thank you, from all of us at Kansas Wheat, to Randy and Kim Fritzemeier for your decades of service to your community and Kansas agriculture and for continuing to share your stories.