The National Association of Wheat Growers presented three Kansans with Wheat Advocate Awards this week. The Wheat Advocate Award is given annually to Members of Congress who have demonstrated support for the wheat industry above and beyond the norm. 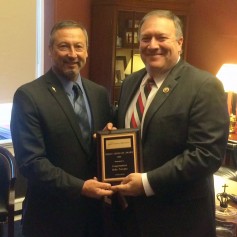 Congressman Mike Pompeo (KS) has led the charge in Washington D.C. for an industry-supported GM-Labeling bill. The bill would create certainty for farmers, food companies and industry partners, limiting the confusion created by state ballot initiatives. The Congressman endured numerous attacks for his support of the bill, including during his re-election campaign. 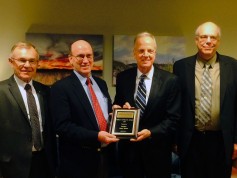 Senator Jerry Moran (KS) has been a champion of issues that impact wheat farmers during his tenure in Congress. As a member of the Senate Ag Approps subcommittee, he has had opportunities to highlight farm bill implementation concerns during appropriation hearings and advocate on behalf of wheat farmers. He has been a longstanding supporter of wheat-friendly food aid policies, and expanded trade to Cuba. 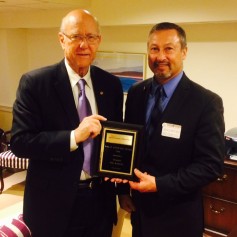 Senator Pat Roberts (KS) has been a long-time supporter of wheat farmers. As a senior member of the Senate Ag Committee he has ensured that the federal farm safety net remains strong and that crop insurance continues to work for growers. As the likely next chair of the Senate Ag Committee, he will have additional opportunities to focus on key issues for wheat growers.

Congressman Bob Gibbs (OH) was named Wheat Leader of the Year, an award that is given annually by NAWG to one Member of Congress based on his or her demonstrated commitment to the well-being and goals of the wheat industry.

Congratulations to these advocates for wheat! Kansas wheat farmers appreciate your continued efforts to support for the wheat industry.