A chance conversation would lead David Frey, a young broadcaster, to a career representing Kansas wheat farmers for more than forty years as one of the industry’s longest-serving leaders. 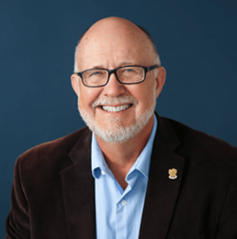 In 1978, Frey was working as a newsman for a radio station in Hutchinson. His mother had an interesting conversation at her hairdresser with Anna Jane Baird, then home economist with the Kansas Wheat Commission. The organization had a new communications position open and it sounded right up Frey’s alley. He interviewed in Topeka and was named the director of public affairs. Rich Hawkins, a broadcaster with KXXX in Colby, challenged Frey to start a weekly radio program, creating the precursor to the Kansas Wheat Scoop in his very first week of work.

“One thing I felt I could bring to this wheat farmer-state agency — which was created to promote the use and sale of wheat — was to get wheat issues in the media,” Frey said. “I knew that we met the public service role and would not have to buy advertising, but would be an official and qualified source of information and news.”

Frey continued to grow professionally with the Kansas Wheat Commission, eventually becoming the organization’s administrator (executive) from 1996 to 2005. During that time, Kansas hard red winter (HRW) became part of the international spotlight on wheat with government and cabinet-level officials from other nations traveling to Kansas to meet with farmers and learn more about the crop and U.S. wheat purchase and delivery systems.

Over the decades, disruptions in these markets had substantial impacts on the prices Kansas wheat farmers received. Frey remembered when the Russian government, then the Soviet Union, put a zero-tolerance into effect for wheat scab, which had caused issues with the Kansas crop that year. The Soviet Union was then one of the largest HRW importers and the abrupt stop in sales caused major market disruptions. With the help of top commercial grain specialists — including Karl Finney with USDA, Dale Phillips with Union Equity and Steven Graham — Frey and others at Kansas Wheat and U.S. Wheat Associates worked with a high-level delegation from the Soviet Union. When they returned to Russia, they changed their specifications from zero to allow U.S. commercial sellers to bid for sales.

“I’m also proud of the role that Kansas Wheat played in pushing for cleaner U.S. grain on the export market,” Frey said. “It is more competitive and it is noticed and appreciated by customers. Not everyone in the industry agreed with us on this, but we were able to successfully encourage U.S. Secretary of Agriculture Dan Glickman to tighten the specifications for dockage (non-wheat material in wheat) on food aid shipments which the government purchased.”

In addition to market development, Kansas farmers have long supported P.L. 480 food assistance programs, better known as Food for Peace. Frey recalled when the Minister of Food, Mr. Meshbahuddin, visited Kansas from Bangladesh and told him that the program, which provided wheat and flour, was truly “food for peace” in his country.

“His comments are something that stuck with me,” Frey said. “I realized how valuable it is that Kansas farmers are producing far more than we can consume and how critical that is, literally life or death for many places in the world.”

Frey would extend his international work after leaving Kansas Wheat. From 2005 to 2016, he worked in international development projects in Afghanistan, where he served as the country director for Grain Industry Alliance, subcontracting for USAID and living in Kabul. His work included oversight of grain storage construction, water wells and training programs. He also served as deputy chief of party and regional site manager for the University of California-Davis on projects supported by USDA and USAID, working with Afghanistan Ministry of Agriculture extension workers in northern Afghanistan.

Frey has also worked with the Flour Fortification Initiative, mostly in Asia, advocating for using wheat flour as a low cost, efficient carrier for adding micronutrients and vitamins to otherwise substandard diets.

He said working with the agricultural sector in Afghanistan gave him an appreciation for research investments in the Kansas Wheat Innovation Center, which houses wheat genetic stores, technology and the scientific knowledge to put those genetics to work for farmers. He pointed out the unique set-up with a building owned by Kansas wheat producers, but a place where commercial, private and public wheat scientists and breeders can work collectively.

“Afghans annually consume nearly 400 pounds per capita of wheat food products, mostly naan flatbread,” Frey said. “Yet this war-torn, very poor country cannot do what we are doing here. Where else do wheat farmers and others feel compelled to invest in wheat seed development and share the knowledge with other public and private scientists to meet the coming future demand for food? I believe in what the Kansas Wheat Innovation Center is doing. It is world-changing-powerful and something that needs support, yet returns so much more value than the investments made.”

Frey retired in summer 2020, now living in Lakewood, Colorado, with his wife, Debra. He fondly remembers his world travels related to wheat.

“I appreciate the great work my wife did to help host wheat buyers and processors from around the world and the patience of my four children with time away and hosting trade teams in our home,” Frey said. “It has been an honor and a blessing to work for Kansas wheat farmers.”