My name is Jordan, and I grew up on a wheat farm. Now I work for Kansas Wheat at my dream job that I never knew I had. I eat wheat, I've rolled around in wheat, eaten the berries straight from the field, I've ridden in combines, even driven one (I wasn't very good), and I have constructed award-winning wheat straw nests (although my cousins would contest that fact). 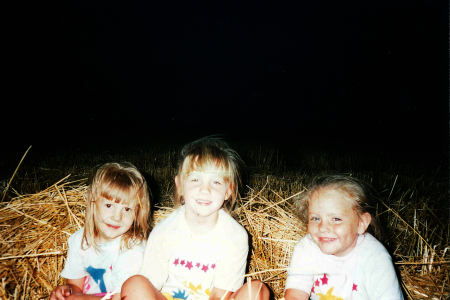 My cousins and I (far right) rolling around in a wheat field in the mid-90s.

I recently read an article detailing how wheat farmers "drench" their crops shortly before harvest as a "standard procedure," but I wasn't convinced. I knew, based on my own experiences, that it wasn't happening on our farm, but I recognize that I am not an expert in all facets of wheat production.

So, I looked to those experts. I talked with folks who raise wheat in Kansas, as well as a woman with a doctorate and a specialty in weed science. I've reached out to a wheat geneticist and a gentleman who works with industry affairs for Monsanto. Here's a spoiler-alert for the rest of the article... They have all agreed that it is, NOT STANDARD PROCEDURE for winter wheat farmers to spray their crops with herbicides 7-10 days before harvest.

Alright... Let's get down to business.

What Does the Science Say...

The thing that struck me about several of the "whistle-blowing" articles I have seen on the topic was the wealth of linkable articles sourced in what I was reading. The problem is, the more links you click, the more you jump to unhelpful statistics generators that are difficult to use (unless you know exactly what you are looking for), as well as links back to other pages on the same website. Unsatisfied with these sources, I went and found my own.

Anita Dille, Ph.D., is a professor of weed ecology at Kansas State University. 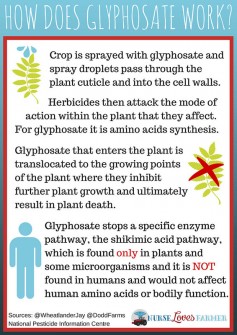 "The purpose of herbicides (like Roundup®) is for weed control," said Dr. Dille. "There are a number of different times that herbicides are put on for weed control. And often if you think of a wheat production system, it could be right before planting or right after planting if there's weeds during the crop."

So, the  majority of herbicide usage happens before, or shortly after planting. That is around eight to nine months prior to harvest. Spring and durum wheats, in particular, have higher percentages of herbicide use than winter wheat, according to the USDA. However, Dr. Dille was quick to point out that there is no time frame for the data presented, so a large majority of the herbicide usage described was most likely before, or right after wheat was planted.

In those months pre-harvest, a lot can happen to the crop. At harvest time, you can probably count on there being some weeds, but these don't generally pose a problem if the weeds are shorter than the wheat head. If there are heavy rains at harvest time, combined with a thin stand of wheat, weeds can pose a serious problem for farmers. Weeds can make harvest difficult by making the grain harder to thrash and by putting unwanted foreign material in the bin. Then, farmers will have a serious choice to make: harvest anyway and face pay dockages at the elevators (or even risk being turned away), abandon the field and pray for a better crop next year, or spray for weeds and incur costs and a delay in harvest.

"Glyphosate is typically applied with a ground rig, and a ground rig will only run the wheat down," said Brett Carver, Wheat Genetics Chair in Agriculture at Oklahoma State University. "In most U.S. wheat regions, it takes a situation of no-other-choice desperation to consider glyphosate as a harvest aid….certainly not the usual scenario."

For those who choose the latter, there are regulations to be followed.

"There's all sorts of research that goes on before information gets put onto a label as a legal recommendation," said Dr. Dille. "It starts with the companies. They've done the research. Then, it always goes to a contract research or university level, unbiased and independent kind of sources. Then, all that information goes together in a petition to the EPA (Environmental Protection Agency), before it can be put onto a label as a legal recommendation. All that is regulated. The label is a legal document that the growers have to go by."

"U.S. wheat producers do NOT routinely use Roundup®, or other formulations of glyphosate, for pre harvest applications," said Steve Joehl, Monsanto’s Industry Affairs Director for wheat. "Quite the contrary, it is the exception rather than the rule. You should be aware that Roundup has an approved label with the EPA for pre harvest use, in the event farmers desire to control perennial weeds, like Canadian thistle, prior to harvest; or for farmers in areas of short growing seasons where crop maturity can be delayed. When used according to labeled recommendations, it is a very safe application. But because Roundup is used in Roundup Ready crops of corn and soybeans, these perennial weeds infestations have been reduced and the practice has been reduced even more."

The label recommendations, in partnership with resources from state extension offices, help farmers make decisions on what herbicides to apply, and even if the application is worth it. Just because farmers have access to sprayers doesn't mean that applying herbicides, like glyphosate, is practical.

"Part of the thinking is that a grower is not going to put on something that's not needed, because that's an expense," said Dr. Dille. "They need to make a good decision in regards to the expense that it is. And is it going to make a difference, or if I wait a week will the weeds die and I'll be fine? It's a balance."

At harvest time the wheat plant is dead and dried out. Since herbicides need a live plant to be effective, very few chemicals are absorbed into the plant and transported to the berry. However, there may still be some residue left on the heads. But when the mandated waiting period is followed, it is less likely that the herbicide will still be present in the final product.

What Does the Farmer Say?

Justin Knopf is a husband, father of two and a wheat farmer. 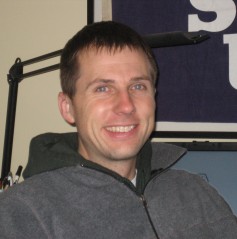 "It's so sad and disheartening to me that people are trying to demonize the wheat that I work so hard to produce," said Knopf. "We work diligently to produce a quality and safe wheat to feed people around the globe a nutritious product, all while doing it with environmentally safe methods."

But how he feels isn't relevant. It's all about what he applies.

"No, I have never used glyphosate in any form as a desiccant (a substance that induces dryness on the plants it is applied on) for as long as I have been farming. And I don't think my dad did either," said Knopf. 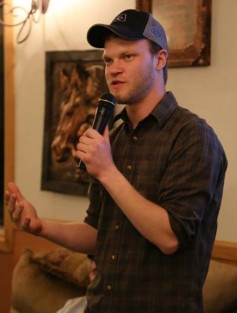 Greg Peterson, the eldest brother from the Peterson Farm Bros crew, has returned to work on his family operation. I took several classes with Greg both pre and post Youtube fame, and am proud to say that I was viewer number 15 on their first parody video, I'm Farming and I Grow It (now viewed over 9 million times).

"Spraying Roundup on wheat is extremely uncommon where we are from," Peterson said. "In my entire life we've done that once and that was when the option was to spray one of our fields or lose the crop completely. Even then, it is illegal to harvest that soon after spraying, you have to give it several weeks and the spray will wear off, break down, and no longer be effective."

These men operate very different farms, but they all answered the same thing when asked,

The answer, without hesitation, was a resounding "YES."

"The wheat that comes off of my farm is absolutely safe," said Knopf. "My three and six year olds play in the wheat that we harvest, and I wouldn't let that happen if it wasn't."

In Defense of this Long Essay

After talking to the real experts who have spent years learning about the wheat industry in classrooms, labs and fields, I can't help but conclude that the conventional wheat supply is safe. If you disagree, please feel free to support organic wheat farmers with your business. They also work hard to put food on your table, and I appreciate the lengths they go to in order to grow their crop. If you would like to visit a wheat farm and the Kansas Wheat Innovation Center, please get in contact with us! Our shop doors are open for all to see because we are proud of the safe, nutritious product that our Kansas wheat farmers raise.

I will continue to eat, and bake, wheat. My family will give my adorable nephew wheat filled goodies. I'll watch his face light up when he takes combine rides. And, maybe someday if I also have kids, I will relinquish my straw nest building title. 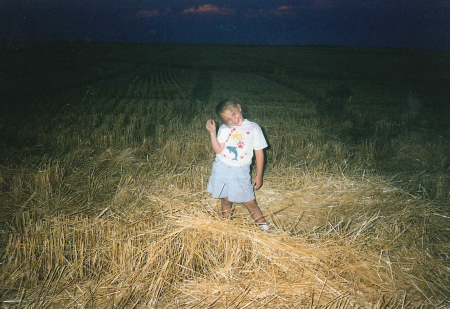 Don't believe me? Check out these other resources!

Nurse Loves Farmer- I've just been introduced to Sarah's world, and I can tell I like her a lot. She has an excellent blog post (with some awesome photos and the infographic I shared above.)

Prairie Californian- Jenny, a native Californian, married a North Dakota farmer, and this is their story on how they operate. She has some more great infographics and an interesting perspective.

Setting the Record Straight on Glyphosate Application- Brett Blankenship, wheat farmer from Washington, talks about his way of life and protecting the environment.

To listen to an edited version of this post for our weekly Wheat Scoop radio spot, click play.