The next great wheat variety started out as a single cross between two parents. But before that variety is planted in a farmer’s field, it will have been selected and tested over ten to 12 years.

The following snippets are but glances of the larger wheat breeding program.

The wheat breeding process starts with a “conscious cross” between two parents. The wheat breeder’s goal is to combine as many desirable traits as possible into the progeny – combining high quality with high yield, for example.

However, sometimes more than two parents are needed to produce the desired genetics. In this case, the wheat breeding team may create a three-way cross, in which a first cross – that could combine diseases resistance with yield – and then cross with another parent with an additional desired trait – like high quality.

Starting in the Short Row 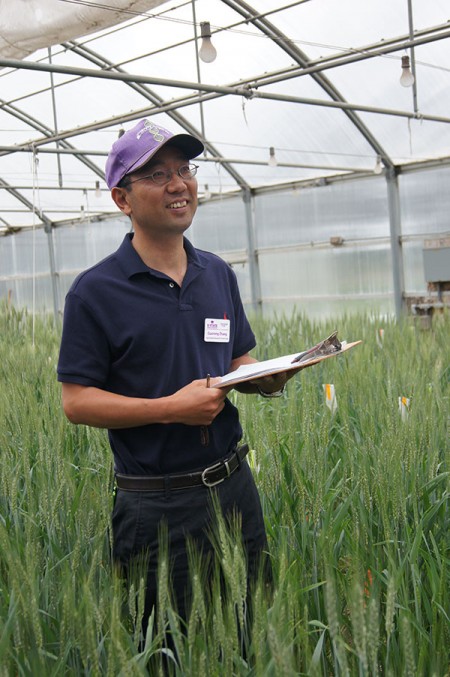 Zhang said each short row, like the ones in this greenhouse, will produce thousands of second generation seeds. 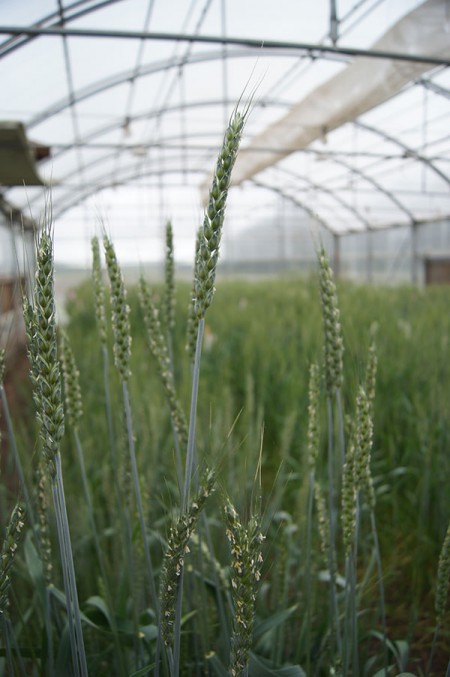 Here, the goal of each cross is to create genetic variance – or get all the possible combinations of the two parents. Just as siblings are not identical, neither are the different wheat progenies from each cross.

The team will plant the next generation of seeds in field plots, generating more variance and producing more genetically pure progeny plants though selfing.

Zhang said that the only crosses that are removed from advancing to the next breeding stage are the very bad ones – crosses with high disease susceptibility, far too late maturing, etc.

By the third generation, the research team will select 200 to 300 plants (one head picked from each plant) from each population. Each head is planted in its own short row in a field plot. By this fourth generation, more than 20,000 head rows will be planted in the field. Then, the wheat breeder will select good short rows to advance to yield trials.

Using doubled haploids could speed up this process because genetically pure lines are produced in one step. 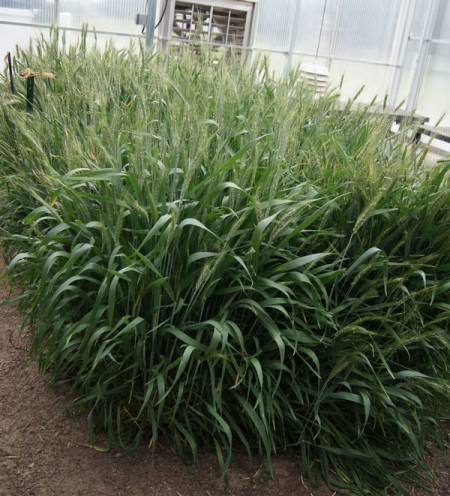 Some doubled haploid lines only have a few seeds available, which are not enough to plant in a short row in the field. As a result, Zhang said the team was growing these lines in the greenhouse to produce more seeds that will be planted in field testing this fall. This particular greenhouse section housed about 1,400 doubled haploid lines.

Through traditional wheat breeding, lines do not start out genetically pure and will be segregating through the early stages of breeding. The breeding team has to select six heads of each line at each generation and then each head is planted as a short row in a reselection nursery. Doing so, generation after generation, produces breeding lines that are closer and closer to genetically pure. 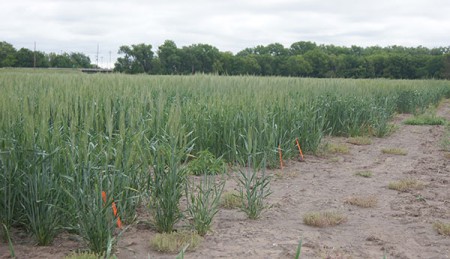 Zhang said this field had about 5,000 reselection head rows. At this stage, selection is based on plant height, maturity, disease resistance, uniformity and yield data.

Next, advanced lines are planted at six locations across Western and Central Kansas as well as in multiple replications at each site. This stage is called Advanced Yield Nursery (AYN).

Advanced lines will move on to the Kansas Interstate (KIN) trials involving multiple replications at more sites across the entire state. Normally, the lines need to be tested for three years in the KIN before release as a variety. During the later years in this stage, the line is also grown in the Kansas Wheat Performance Test (KWPT) and Southern Regional Performance Nursery (SRPN). Through testing in multiple locations and multiple years, wheat breeders are looking for a line’s adaptability to varying environmental conditions. 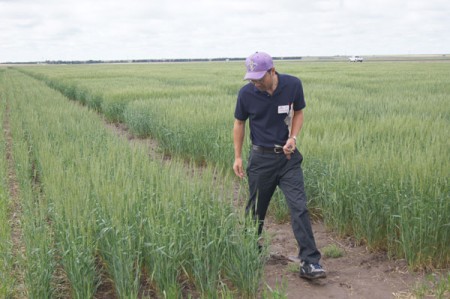 This part of the research station featured lines in yield trials. Zhang is checking the plots for signs of disease. 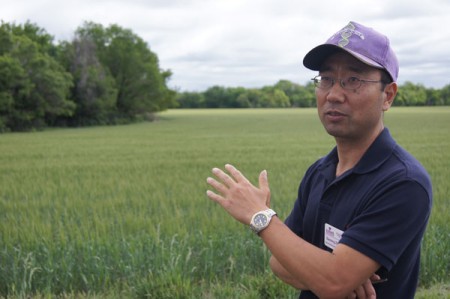 This field grows a promising line in the third year of KIN testing. The seeds produced from this 15 acre plot could be planted as foundation seed this fall if this line is approved for release. Then, the public might have certified seeds available one or two years later. The milling and baking quality of this line is above average and this line has multiple disease resistance to stripe rust, leaf rust and wheat streak mosaic virus.

This field was planted using a low seeding rate, 15 pounds per acre, because there is only a small amount of seed available.

Many additional steps – including viral disease screening in growth chambers as well as milling and baking tests – also occur as a cross moves from a population to a line to a variety. However, advanced technologies allow researchers to be more efficient, saving time and effort. With ADM’s support, the Hays breeding program is able to utilize more of these advanced technology resources.

Additionally, the incorporation of the genomic selection through genotyping by sequencing could help the Hays wheat breeding program to predict the outcomes of these crosses earlier. Molecular markers allow the breeding team to screen lines for specific traits, including quality traits, even before they are planted in the field.

With all these resources combined, the K-State wheat breeding program in Hays continues its tradition of providing great wheat varieties designed specifically to meet the needs of Kansas wheat farmers and their customers.