A handshake and a promise still count as good business for wheat farmers, especially when a top customer pledges to purchase a crop not yet planted. Taiwan flour millers did just that on September 18 in Topeka, Kan., when they signed a letter of intent to purchase 62.5 million bushels (1.7 million metric tonnes) of U.S. wheat, including hard red winter wheat, in marketing years 2015/16 and 2016/17. The joint communique, signed by Kansas Wheat Commission Chairman Jay Armstrong and the head of the Taiwan delegation, Mr. Hsin-Yao Lin and witnessed by Governor Sam Brownback and Director General Jack J.C. Yang, is worth $544 million.

During the signing ceremony, Director Yang said, “I would like to thank the Kansas government, Kansas Wheat and Kansas State University for receiving the Taiwan delegation.” Yang said the communique is “a mutual beneficial partnership between Kansas and Taiwan.”

The biennial Agricultural Trade Goodwill Mission to the United States is a larger effort to commit to purchasing grains and other agricultural products for the people of Taiwan. This year’s team included representatives from the Taiwan Flour Millers Association (TFMA), which imports wheat on behalf of all 20 Taiwanese flour mills. The team was accompanied by U.S. Wheat Associates Country Director Ronald Lu, stationed in Taipei. 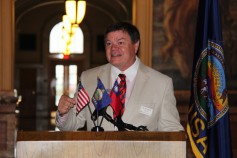 “This agreement represents the best among friends,” said Armstrong.

The first Taiwan Agricultural Trade Goodwill Mission traveled to the United States in 1998.

Armstrong said, “Since these goodwill missions have been going on, we have sold to Taiwan the equivalent of 24,371,640,000 loaves of bread. That goes a long way toward giving us this day our daily bread.” 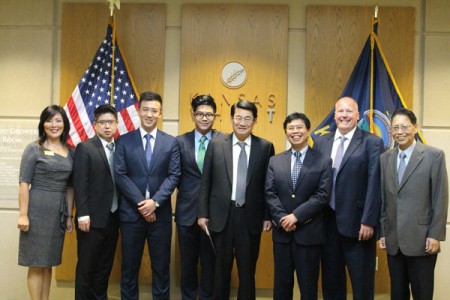 While in Kansas, the TFMA group toured the Kansas Wheat Innovation Center, IGP Institute, Hal Ross Flour Mill and Radina’s Bakehouse in Manhattan. In addition to visiting agricultural producers and industry in Kansas, the Goodwill Mission traveled to Washington, D.C., Idaho, Montana and Washington state before returning to Taiwan with the knowledge that their commitment is appreciated by U.S. wheat farmers, who work hard each year to grow the world’s most reliable supply of high quality wheat.

Officially known as the Republic of China, Taiwan is the sixth largest market for U.S. wheat on average, importing nearly 37 million bushels each of the last two marketing years. Those imports represent more than 80 percent of Taiwan’s total wheat imports each year and include an average of about 9 million bushels of hard red winter wheat. 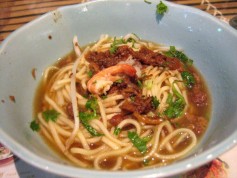 In Taiwan, hard red winter wheat is used to make noodles and other traditional Chinese flour foods, similar to other North Asian countries. Due to local tastes and preferences, however, TFMA specifies for higher protein wheat, typically contracting for a minimum protein of 12.5 percent. While the majority of this wheat is purchased from ports in the Pacific Northwest, the consistent volume of imports results in increased demand and prices for all hard red winter farmers.

“Taiwan is a sophisticated buyer that looks for high quality wheat and we grow that kind of wheat here in Kansas,” said Armstrong. “And this agreement is a promise from a reliable customer that they’re looking for that kind of wheat.”

Listen to Armstrong's speech at http://kswheat.com/sites/default/files/armstrong.mp3

By Julia Debes and Marsha Boswell