These viruses are like parasites; they need a host. Some even need to hijack part of that host’s own genes to replicate and survive. Researchers can now halt this replication process, meaning the virus is not able to spread and damage the wheat plant. 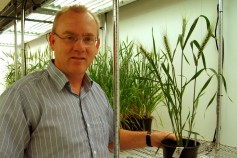 Dr. John Fellers, USDA Agricultural Research Service molecular biologist based at Kansas State University, has teamed up with Dr. Harold Trick, Kansas State University plant pathology professor, to find exactly what parts of the wheat plant these four viruses commandeer to replicate and how to stop them before the virus is activated. (Watch KSRE Video interview on this research.)

The team started by identifying the exact genes that could help the wheat plant identify and destroy the virus threat. Fellers explained that this acted like a Most Wanted poster that the plant could refer each potential threat to and attack when detected. While effective, this process could only address a single virus at a time.

However, the team found all four of the abovementioned viruses infect a wheat plant in a similar way. As Fellers detailed, the viruses enter the plant with a protein cap on, much like an opposing fan sporting a counterfeit KC Royals hat to sneak into Kauffman Stadium. With this disguise, the viruses convince the plant’s eukaryotic initiation factors, part of the cell’s own reproductive system, to help them replicate. Or, for analogy’s sake – buy some beer. Trick reported that all four viruses use a similar counterfeit cap and commandeer the same two cell components, identified as eIF4E-2 and eIF4G. 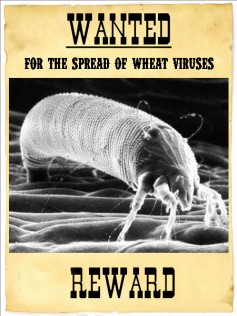 Trick and Fellers genetically shut down those genes by putting them on the plant’s Most Wanted List. In other words, the stadium managers told the concession stand that they cannot sell beer. With the two eukaryotic initiation factors eliminated by the wheat plant itself, Fellers explained the viruses have no means to replicate and die off – with no ill effect to the plant.

With a genome five times as complex as humans, the wheat plant has redundancies built into its genetics. Trick emphasized that there was no phenotypic penalty, meaning no loss in yield or negative effect to the plant’s function even though wheat genes are shut down. In other words, the team can shut down sales of the viruses’ favorite Budweiser, but keep the Coors stands open for true Royals fans. 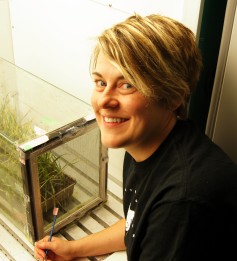 Doctoral student Jessica Rupp is testing these plants for their resistance by exposing them to the virus in growth chambers. For Tritcum streak mosaic virus and Wheat streak mosaic virus, that is easy – the virus can be rubbed onto the plant’s leaves. For Soilbourne mosaic virus, a fungus is needed and Barley yellow dwarf virus is best transmitted by aphids.

For all of these processes, she said the resistance is stable through the fifth generation, which has never been accomplished before in wheat. She further explained that because of the redundancies in the wheat plant, a transgene is sometimes silenced in the traditional breeding cycle since the wheat plant is so good at eliminating copies. That is not the case with these two factors. In fact, the process is so effective that Kansas State University filed a patent for it.

Advancing the Science Even Further 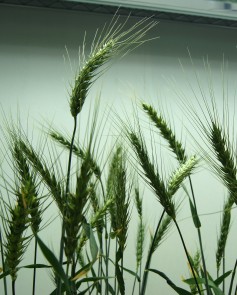 The team’s next steps involve moving these transgenes from their current spring wheat varieties into elite winter wheat varieties adapted to Kansas. The most basic way to do this is traditional back-crossing into varieties like Overly, which is happening now. But, this wheat is still genetically modified, meaning a significant investment in time and money to take it to commercialization.

Now that the two wheat plant components have been identified, however, the research team explained they can use non-genetically modified methods to accomplish the same virus resistance. Using mutagenesis, the team can look for a mutated version of these factors, like one that that will not recognize counterfeit ball caps or cannot sell beer. Or, using an even more efficient non-genetically modified approach called gene editing, they can make very specific, microscopic mutations just to those factors, like going into the instructions for beer vendors and changing a “can sell beer” to “cannot sell beer.”

No matter the method, the discovery of how to prevent yield loss from viral infection for four major wheat viruses could not have happened without the support of their ultimate benefactors – Kansas wheat farmers.

“This type of research is difficult to fund on a national level,” Trick said. “Without the support of the Kansas Wheat Commission, we could not do this research. Period.”