Summertime brings the welcome smell of hotdogs and bratwursts sizzling on the grill. But nothing messes with the BBQ vibe like the bun splitting into two when you are in the middle of making the perfect mix of meat, bread, sauce and toppings. The difference between a hotdog bun that falls apart and one that can stretch and hold its form comes down to one micro ingredient — wheat protein. And a facility in Russell, Kansas, produces more of this micro ingredient than anywhere else in the country, helping bind together hot dog buns, pet food, plant-based meats and more, all while utilizing 100 percent Kansas-grown wheat.

PureField Ingredients is the largest domestic supplier of wheat protein in the United States, producing about 75 million pounds of wheat protein annually. That is more than half the domestic production, and the facility recently completed an expansion that increased production capacity by 50 percent. In addition to the wheat protein manufacturing plant, the Russell compound also includes an ethanol plant, which means the plant takes in wheat and produces wheat protein, high-quality ethanol and livestock feed.

“By expanding our operations, PureField is helping our customers address increasing consumer demand for high-protein, plant-based, and non-GMO foods,” said Brad Kelley, CEO of PureField Ingredients, in a news release announcing the expansion. “Continued demand growth from the bakery, pet, packaged food, and vegetarian and vegan food markets, paired with recent challenges to the global supply chain, have resulted in a shortage of wheat protein in the United States. The expansion also allows us to continue supporting local farmers and, with the creation of additional employment opportunities, our community, as one of the largest employers in Russell, Kansas.”

But What Is Wheat Protein?

Wheat protein, also called vital wheat gluten, is an essential part of many food and pet products. Isolated from the bran (the outermost part of the wheat kernel) and the starch (part of the inner layer called the endosperm, wheat protein is an extracted and activated part of the kernel. When added to a recipe, wheat protein provides a binding agent (pure gluten) that helps the end product — like a hot dog bun — hold its shape and not crumble. This quality factor is called elasticity, like a pizza dough tossed in the air that stretches out without becoming little dough grenades.

Wheat protein is also used as a binding agent in plant-based meat alternatives, like seitan — nicknamed “wheat meat.” And that same characteristic is also desirable in the pet food market to help that dry kibble stay in the appropriate shape — about 40 percent of the wheat protein produced in Russell is destined for pet food.

As Evan Backhus, commodities manager for PureField Ingredients, explained, there’s just no ingredient out there that provides the same combination of added protein, elasticity and binding as wheat protein.

The two plants in Russell employ about 100 people, including grain inspectors, chemists, flour millers, procurement, merchandisers and others. The plant is shut down four times a year for maintenance. Otherwise, the facility runs 24 hours a day, seven days a week.

The journey from wheat kernel to wheat protein is complex, but the plant is incredibly efficient. On an average day, roughly 57 trucks deliver wheat to the plant — every load sourced from the western two-thirds of Kansas. Every load of wheat is graded and inspected before a truck can unload, which takes between five and seven minutes per sample. Samples must be Grade 1 or Grade 2, with protein above 11.5 percent and a test weight of 58 pounds per bushel or above. If the sample does not meet the smell test — the grain inspector checks for odor from smut, fumigation or other issues — or the inspector finds even a single live insect, the entire truck is rejected.

Once a truck passes inspection, an automated system guides the truck to where to dump, and the grain is stored on-site. Right now, the plant only has enough storage for about a three-week supply — 750,000 bushels — making it important to have wheat in storage locked in elsewhere. Backhus explained the company’s quality lab has demonstrated decreased quality for wheat protein extraction if wheat is stored for more than a year, so he prefers to use high protein wheat from the first elevation, meaning sourced directly from the first place a wheat farmer delivers the wheat after harvest — either a local elevator or preferably on-farm bin storage. Locking in a steady supply of Kansas wheat that can deliver throughout the year can be difficult, but Backhus is up to the challenge.

Once the wheat is binned, and the plant is ready, it is time to make wheat protein. The start of the wheat protein production process looks very similar to a flour mill with large, loud, rumbling machines and pneumatically sealed pipes crisscrossing the different floors of the building. In the beginning, wheat kernels undergo a traditional cleaning process. Sifters help sort out cell phones, bolts or other random foreign objects that might have fallen in the grain truck. Tempering — adding water and heat — raises the moisture content of the kernels before the milling process. Rollers then peel off the bran like a banana.

Then the wheat kernels continue in a milling process of rolling and sifting, which grinds larger particles into smaller ones and continues to sort out wheat middlings — basically larger particles that don’t grind down. Wheat middlings can be sold as animal feed, but the Russell plant utilizes them internally at the ethanol plant down the blacktop — more to come on that.

The resulting flour is not as fine as one would buy at the store but is the same basic texture. At the next stage in the plant, water and enzymes are added to make the flour into a dough. This process separates the wheat protein, which looks like white, chewed-up bubble gum. The solid is separated from the liquid.

The watery starch is headed down the blacktop to the ethanol plant, where it is used as the primary feedstock to produce biofuels. This specific ethanol meets the standards for California’s low carbon fuel standard, so the ethanol can be sent by rail as far as the West Coast as well as sold regionally.

The by-product of the ethanol production process is distiller’s grains — the solid parts of the wheat leftover as the liquid goes into ethanol. The wheat middlings from the earlier stages of milling are added to this by-product. The result is a new type of distiller’s grain that is sold to local feedlots.

Back to the wheat protein. Backhus explained the slimy solid mix is like what a farmer gets when he pops some wheat kernels into his mouth in the field — the right mix of chewy and sticky. The last step in the production process is to take the liquid out of the wheat protein mix — drying down the wheat protein into its final powder form.

The finished product is packaged and ready to ship. Because wheat protein is a micro ingredient, a food or pet company only needs a small amount in their recipes. As a result, 60 percent of the wheat protein produced in Russell is sent out in 50-pound bags or 2,000-pound totes. The remaining 40 percent is sent out in bulk to larger customers, all by truck.

The Only Limit to Potential Is Harvest

Even though the plant only recently completed its expansion, PureField Ingredients is already planning the next phase — to double in size again. There is a hungry appetite for domestically produced wheat protein. Backhus explained the United States utilizes roughly 650 million pounds of wheat protein a year, but only 140 million pounds are produced within the country. The remaining amount has to be imported from Europe or Australia. Sourcing internationally, like many other products nowadays, is getting harder with shipping delays, and the long transport can degrade the quality of the finished product.

The main limitation to meeting this need? Sourcing enough high protein wheat of the right quality.

Because protein levels can vary greatly during wheat harvest, it is difficult for the company to forward contract production. As a result, Backhus goes on the hunt each June to find just the right wheat — hard red winter or hard white winter are both acceptable — from the right grower to lock in as much wheat as possible for the upcoming year. He maintains a database of more than 1,800 wheat growers and elevators, takes calls from producers who think they have a match, and hits the road. He has even bought wheat straight off the back of a farm pickup in the field if his portable testing equipment gives the right results.

The premiums for that high-quality wheat are a good deal for growers, but Backhus ideally needs them to have good protein and be able to bin the wheat on-farm for at least 30 days, locking in supplies for the plant but stretching out delivery.

But even the best-laid plans can go astray if Mother Nature does not cooperate and the wheat harvest does not end with a good quality crop.

“I go where the protein takes me,” he said. “I’ve got a group of pretty good farmers that I like doing business with that have on-farm storage.”

Still, the upside is real — and PureField Ingredients is continuing to research how to better secure wheat supplies by combining contracts for farmers, agreements with cooperatives and specific agronomic practices to hopefully produce the highest quality wheat possible in addition to partnering with industry on research to grow higher quality/higher protein wheat. Backhus encouraged growers to look at varieties with not just yield advantages and disease resistance but high milling and baking quality. And to talk with their agronomists on how to best manage for high protein, high-quality wheat. Doing so is a win-win for this large Kansas company and for the farmers who supply their must-have ingredient. 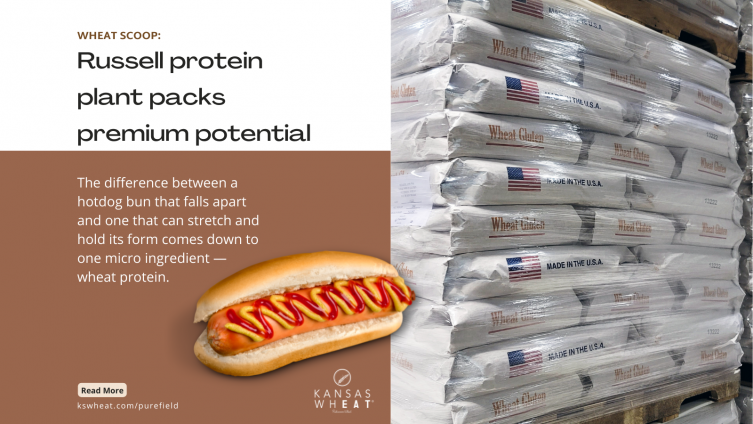