Pancakes. Flapjacks. Hotcakes. Blintz. No matter what you call them, Saturday is the day to fire up the griddle and make breakfast for the family. September 26 is National Pancake Day.

For Kansans, however, pancakes are a matter of dispute. Specifically, refuting the claim that “Kansas is flatter than a pancake.” A 2013 survey by the American Geographical Society reported that 32.5 percent of Americans surveyed believed Kansas was the flattest state, including 29 percent of Kansans.

Luckily, research has the answers.

How Flat Is a Pancake?

The Annals of Improbable Research collects random scientific research studies and hosts the Ig Nobel Prizes, which honor science, medicine and technology achievements that “make people laugh, and then think.” In 2003, the magazine published a study that tackled the very question: “Is Kansas flatter than a pancake?”

To answer, researchers from the geography departments of Texas State University and Arizona State University used a mathematical analysis to determine the flatness ratio of both Kansas and a pancake purchased from IHOP. 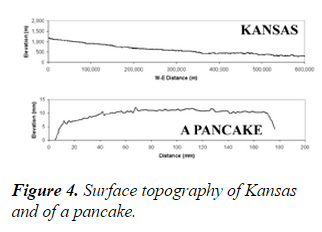 For the mathematically inclined, the study cited the formula as: “The length of an ellipse’s (or arc’s) semi-major axis a is compared with its measured semi-minor axis b using the formula for flattening, f = (a – b) / a.”

For the rest of us, a value of 1 indicates a perfectly flat surface. The further away from 1, the less flat the surface.

To start, researchers cut a cross-section of the pancake, just like a judge at a county fair foods contest. Then, they took a digital image and measured the pancake’s topography using a laser microscope. Finally, the researchers used elevation data from the United States Geologic Survey to construct a west-to-east profile of Kansas.

Unfortunately for Kansans, who have long touted local geographic features like the Flint Hills to dispute the flatness of the state, the researchers did determine that Kansas was indeed flatter than a pancake. While the pancake had a flatness of 0.957, the flatness of Kansas measured 0.9997. In the words of the research team, “The degree of flatness might be described, mathematically, as ‘damn flat.’”

But Kansas Is Not Alone 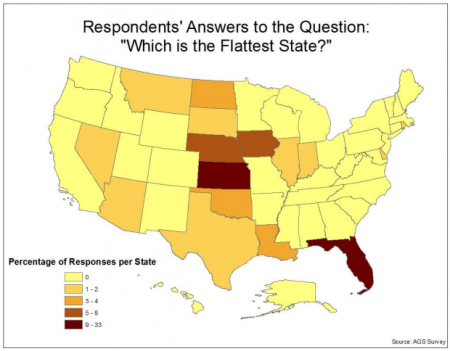 Never fear, there is still cause to celebrate this National Pancake Day. Kansas may indeed be flatter than a pancake, but Kansas is not the flattest state. Remember the American Geographical Society geography survey? The survey reported that Kansas actually ranks as the ninth flattest state when measured by flat land as a percentage of all land.

Which state takes the title of the flattest state? Florida.

According to the geography survey, “There are many ways to measure the flatness of a state. By almost every measure, Florida is the flattest, since its highest point is only 105.2 m. (345 ft.) above sea level, but 77% of all respondents, including 62% of Florida residents, did not recognize its overwhelming flatness.”

So, the next time someone rips on Kansas based on the flatness of our state, simply redirect them to the appropriate target. And then dig in to a tasty stack of pancakes and smile.

Hungry yet? Jump over to the National Festival of Breads website and check out one of these great pancake recipes:

Curious which other states are flatter than Kansas, and therefore also flatter than a pancake? Check out this article from The Atlantic.

Want some research news that helps you grow more and better wheat with less inputs rather than just amuses? Check out these phenomenal research projects funded by Kansas wheat farmers.