Anita DeWeese realized just how much people did not know about agriculture when schoolchildren in her local schools told her that eggs were dairy products – after all, that is where they are located in the grocery store!

“Oh wow! I thought. We have got to educate,” she recalled.

That gap between consumer and farmer prompted her to start conducting agriculture in the classroom activities at local schools in November 2014. Then, she attended Speak for Wheat spokesperson training in spring 2015, just in time to volunteer for the National Festival of Breads in June.

At the event, she worked in the King Arthur Flour booth and was able to help attendees make that connection between the sample flour bags on the table and the wheat used to make it, grown right here in Kansas by farmers like Anita and her husband Jerry.

The farming pair met while attending Fort Hays State University, where both worked at the dairy farm.

“He always tells me, ‘The minute I saw you, I knew you were going to be my wife,” she said, adding that four years later they were indeed married. The couple then purchased the ground where they still live near Pratt and have steadily added acres over the last 20 years.

Today, the couple raises corn, soybeans, wheat and grain sorghum. They also lamb out around 40 ewes. But, Anita said none of the aforementioned compare to the hard work ethic and appreciation for life instilled in their children – Taylor (19), Jessica (17) and Jarod (16). [DeWeese 2015 Harvest Video]

“We both knew that farming was something we wanted…for ourselves and our family,” she said. “That is our best crop – our kids.”

Daughter Taylor is studying food science at Kansas State University, living in the Alpha of Clovia 4-H Scholarship House and competing on the women’s rowing team. Jessica is the family’s animal lover and resident photographer.  And the family described Jarod as the analyst or “big thinker,” saying he challenges the family to explain not only what they are doing on the farm but why they are doing it one particular way. 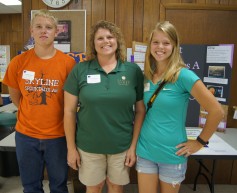 All three have attended the Kansas 4-H Wheat Expo regularly for the last eight or nine years. Anita explained that the family brings exhibits that have already been exhibited at the local county fair as well as submitting samples from Jarod’s 4-H wheat test plots and other fields for analysis by the Kansas Wheat Quality Lab. But, the real attraction for the event is the educational tours – like those this year of the K-State Agricultural Research Center in Hays – and the comradery formed with other wheat-minded families from across the state.

Anita brings those years of personal experience and accumulated knowledge with her now to the Speak for Wheat spokesperson program. Her next challenge? Teaching folks how to bake with yeast.

“People have a fear of yeast breads, and I want to help them overcome that,” she said.

After nearly burning down the kitchen while her mother was away, daughter Jessica said she will stick to taking photographs of wheat harvest. Sister Taylor can do the baking. And Anita will keep sharing her experiences and her knowledge with anyone interested.

Meet Anita and the other Speak for Wheat spokespersons in September at the Kansas State Fair. Stop by the Kansas Wheat booth for your chance to rediscover wheat.