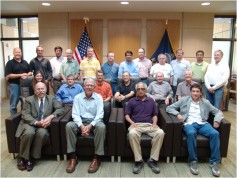 The National Science Foundation has named Kansas State University as its lead institution for the world's first Industry/University Cooperative Research Center on wheat.

The premier center, named the NSF I/UCRC Wheat Genetics Resource Center, is the first National Science Foundation-established research center for any crop plant. It will focus on improving the food production and disease resistance of wheat and other crop plants, as well as serve as a training hub for graduate students and young researchers.

Currently, there are 61 National Science Foundation Industry/University Cooperative Research Centers, most of which are devoted to engineering and electronics.

"We're thrilled that Kansas State University is recognized as an international leader in securing and improving major food sources that are vital to feeding the world's growing population," said Kirk Schulz, university president. "This decision by the National Science Foundation and the support of our industry partners underscores the expertise and talent at Kansas State University. It is a significant milestone in being recognized as a Top 50 public research university by 2025."

The National Science Foundation awarded a seed grant to start the research center, with the stipulation that at least three industry partners had to join and financially back the center. According to Gill, 10 companies signed on as partners.

The Kansas-based research center will be largely based at the Kansas Wheat Innovation Center in Manhattan, where scientists will conduct research on wheat germplasm improvement, using the wheat gene bank of the Wheat Genetics Resource Center.

Both the gene bank -- which maintains about 14,000 wild wheat species strains and about 10,000 genetic stocks -- and its accompanying laboratory will relocate to the Kansas Wheat Innovation Center, Gill said. Several postdoctoral research fellows also will transition to the building.

According to Gill, the research center creates unprecedented opportunities for graduate students and postdoctoral researchers to work alongside industry partners and academic scientists, as well as to develop new genetic research that could immediately improve food security and safety.

"It's really a win-win for all involved," Gill said. "It's good news for Kansas State University because it's taking one of the university's big strengths and using it to improve food supplies, food safety and the economy, and train future scientists. It's good news for businesses that are interested in improving their wheat growing and breeding efforts. They will be able to use this research to accelerate those areas. We see this as very, very exciting news."

The collaborators have the common goal of bringing together the wheat supply chain to create higher yielding, value-added wheat varieties, and better food products, at a lower cost.