The smell of animal barns and the quiet sizzle of frying foods fill the air. The Ferris wheel towers over the midway. The hard work of 4-Hers, FFA students and open class participants line the walls of buildings. The subtle roar of carnival barkers and the muffled screams from Ye Old Mill welcome you back to the dusty, Kansas themed streets at the Kansas State Fair. 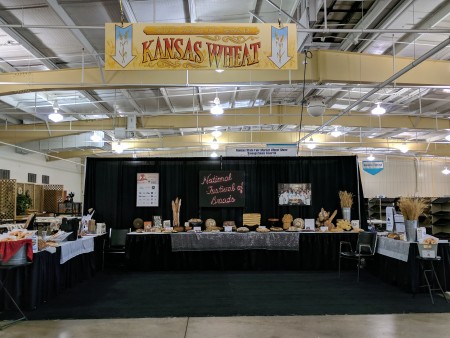 Kansas Wheat will once again host a special tribute to the wheat industry in the Pride of Kansas Building during the entirety of the fair. This year we will be celebrating the National Festival of Breads (NFOB), which is sponsored biennially by the Kansas Wheat Commission, King Arthur Flour and Red Star Yeast.

The Kansas Wheat booth will celebrate the success of the June 2017 event, which included a Kansas farm tour for the eight contest finalists from all around the nation, baking and BBQ workshops and demonstrations, bread displays featuring products from local Kansas bakeries, and much more. More than 3,000 people from at least 46 states and four countries attended the event that showcases Kansas wheat and the farmers that produce it.

“The National Festival of Breads builds upon a rich tradition of grassroots support and is the nation’s only amateur yeast bread baking competition,” says Cindy Falk, NFOB co-chairperson and nutrition educator for Kansas Wheat. “This contest is a way for amateur bakers to be recognized for their baking skills and creativity.” 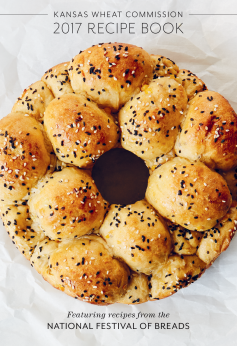 On Friday, September 8 Falk, and Julene DeRouchey, NFOB co-chairperson and nutrition educator assistant for Kansas Wheat, will be baking up a storm in the domestic arts building and demonstrating some of the show-stopping finalists from the 2017 NFOB at 2:00 p.m.

The 2017 Kansas Wheat Recipe Book is hot off the presses, making its debut at the Kansas State Fair booth. The annual recipe book, a staple in kitchens statewide, features NFOB finalist recipes developed by home-bakers all over the country. The recipes have been thoroughly tested and perfected and include the 2017 National Festival of Breads champion, Ronna Farley’s “Seeded Corn and Onion Bubble Loaf.” Kansans Jane Fry, Elk Falls and Michael Favor, Madison, are featured in the book with their respective recipes “Southwest Focaccia” and “French Vanilla Donuts.”

On Governor’s Day, September 14, winners of the Kansas Wheat Yield Contest will receive their awards. This year’s record-breaking yield was 123.75 bushels per acre, achieved by Spencer West of LeRoy. West’s winning plot was five acres planted with WB-Cedar (WestBred), and resulted in his second straight year as the Eastern region yield winner. The announcement of the quality initiative portion of the contest, which achieved the highest overall quality, mill and bake scores will also be announced at the recognition ceremony.

Kansas Wheat representatives will man the Agriland exhibit on Saturday, September 16. Fairgoers will have the chance to ride in a virtual combine, sift grain between their fingers, milk Blossom - the mechanical dairy cow, learn about livestock feed rations and walk through the soil tunnel trailer for an under-the-scenes look at Kansas soils.

The Kansas State Fair runs September 8-17, 2017. Be sure to visit the Kansas Wheat booth in the Pride of Kansas building and learn more about the impact of “The Wheat State.”