Adam’s Folly is a good piece of ground west of Minneola, nicknamed for a hired hand that once ran the plow well into the neighbor’s field. With a gentle slope, a small lake characteristic of the area’s playas and a windfarm tower, the field is a consistent, productive one for Matt Jaeger and his brother Luke.

This year, the wheat grown on Adam’s Folly was some of the Jaeger brothers’ best. Luckily, their long-time friend and seed supplier from Leoti, Rick Horton, encouraged Matt to enter the 2021 National Wheat Yield Contest — Matt’s first year to do so. He even called Matt during harvest for a last-minute reminder to pull a sample for the contest.

That sample was the third-place winner in the state of Kansas in the winter wheat-dryland category, thanks to a final yield of 122.47 bushels per acre. The entry also won Jaeger fifth place nationally, based on the percent increase over the county average. Winners in this portion of the contest were determined by yield increases exceeding the most recent five-year Olympic county average as determined by the U.S. Department of Agriculture.

However, the growing season started as one of the toughest conditions Matt has experienced since he moved to Minneola in 2007 to join his brother Luke on their maternal grandparents’ farm. He noted their no-till operation had to break out the hoe drill to sufficiently plant the wheat crop in some fields.

“It was the driest to get the wheat started that we’ve ever experienced,” Matt said. “So we had to get pretty creative with figuring out how to get our wheat growing.”

Adam’s Folly was planted to WestBred WB4792, having been planted to milo the previous year. The variety — which they source from Horton Farms — is a longer-season variety with very good standability, both characteristics that helped maximize yield potential this year.

“That’s been a really solid performer,” Matt said. “We’ve raised that for several years, and it’s always right up there for us.”

“A lot of times you look at 4792, and it doesn’t look like a tremendous crop looking down the row, just because it does have pretty thick stalks and good standability. It doesn’t always look like the top-yielder, but you get out there and that’s generally going to yield with about anything.”

Their area received rain in November and a good snow in December, which carried the crop into the spring. This is when the magic of the Jaegers’ operation kicked into full gear. 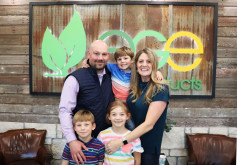 In addition to farming, the brothers operate EGE Products. The company started as a biodiesel plant, but now manufactures spray adjuvants, products added to chemical applications to improve their effectiveness. Their farming operation works as an on-farm research environment, allowing the Jaegers to test out the products they manufacture in a real-world setting.

They also applied herbicide and two applications of fungicide, noting this was one of the first years they did so to also treat for scab. The Jaegers used their Length EXT product with their herbicide and fungicide applications. This encapsulator product helps give the application full residual life.

The weather turned a little dry in the spring, but the rain eventually fell, and the wheat had enough in the tank to make it to a smooth and successful harvest with a winning entry for the National Wheat Yield Contest from Adam’s Folly. Matt wanted to thank Horton Farms for their encouragement and assistance in this entry and with their farming operation. He also noted they run John Deere and CLAAS machinery.

“It does show a lot of hard work that’s been put in,” Matt said. “But at the end of the day, if God doesn’t send the rain, we’re not very good farmers. We’re looking forward to trying some new things and hopefully having a good season. The crop is off to a good start this year, and hopefully, we’ll have some winners next year.”

Thanks to sufficient moisture, Adam’s Folly was planted back to wheat this year. As the new crop is in the ground, Matt encouraged other wheat growers to experiment with their production practices and wheat varieties to help find their own winning strategies.

“Look at your program and be willing to try a couple of new things,” Matt said. “Maybe up the ante on intensity instead of just treating wheat as a ‘throw out there and does what it does' crop. Of course, the Lord needs to send the rain, but if you do a few things, you can really see results year after year.”

For more details on the winning entries and to review the official rules and entry details for the 2022 contest, visit yieldcontest.wheatfoundation.org.