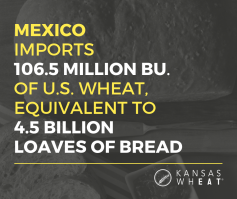 With discussions on trade dominating the public discourse, it is vital for Kansas wheat farmers to preserve a trading partnership with our neighbor to the south. Mexico has become the largest buyer of U.S. wheat in the world. Mexico buys about 106.5 million bushels of wheat from the United States each year, including 55 million bushels of hard red winter (HRW) wheat.

Flour millers in Mexico generate strong demand for U.S. hard red winter wheat, the primary class of wheat grown in Kansas. In MY 2015/16, Mexico surpassed Nigeria and Brazil to become the top market for U.S. HRW.

A rising number of industrial bakeries, along with traditional artisan bakeries, account for about 70 percent of wheat consumption according to CANIMOLT, the association representing Mexican millers. That puts Kansas farmers and other HRW producers in a good position to meet that demand. Being closer to HRW production and having a highly functioning ability to import a large share of HRW directly via rail from the Plains states, is an advantage for Mexico’s buyers.

Yet our customers there have many other sources of milling wheat to which they can turn. In response to rising world grain prices in 2008, Mexico lifted a 67 percent import tariff on wheat from outside the United States and Canada. To date, the tariff has not been reapplied and the Mexican import market is currently tariff-free for wheat from all qualified origins.

The United States-Mexico-Canada Agreement (USMCA) has been signed by leaders of the United States, Canada and Mexico. It now needs to be ratified by Congress. If it doesn’t pass and the President pulls out of North American Free Trade Agreement (NAFTA), Mexico could begin to shift their imports to other origins.

The negative impact on the United States would include a net loss of 256,000 U.S. jobs, a net loss of at least 50,000 jobs in the U.S. food and agriculture industry, and a drop in GDP of $13 billion from the farm sector alone. NAFTA withdrawal would also disrupt critical industry supply chains, close markets, eliminate jobs, and increase prices for the basic needs of American consumers.

The USMCA also includes important provisions for wheat farmers. Most notably, USMCA retains tariff-free access to imported U.S. wheat for our long-time flour milling customers in Mexico. Congress must vote to ratify USMCA. That is a crucial step toward rebuilding trust in U.S. wheat as a reliable supplier in this important, neighboring market.