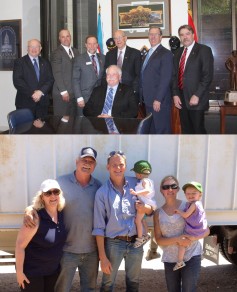 Kansas wheat farmer Paul Penner is equally likely to share updates from Capitol Hill or pictures of his grandkids. While Penner will soon retire as President of the National Association of Wheat Growers (NAWG) following the 2015 Commodity Classic, he has served as a strong advocate for Kansas farmers during his tenure as both a state and national officer.

“Three words come to mind when I think of Paul: thoughtful, sincere and articulate,” said Michael Jordan, president of the Kansas Association of Wheat Growers (KAWG), from Beloit. “I have enjoyed the opportunity to work with him for more than a decade and appreciate his efforts.”

Penner and his wife Deborah started farming in the late 1970s, but did not inherit or buy into an existing operation. Today, Penner farms 1,000 acres of his own ground and custom farms another 1,500 to 2,000 acres for other small area farmers in Marion and Dickinson counties. The diversified operation is mostly no-till and includes wheat, corn, soybeans and hay, in addition to an occasional rotation of sorghum.

Penner started attending local Kansas Association of Wheat Growers (KAWG) meetings in the mid-1980s. One particular meeting in Great Bend piqued his interest in getting more involved in the organization.

“I raised my hand and asked if I could contribute and they said sure,” he said, adding that after the meeting was over, the chair asked if Penner would be interested in filling an unexpired term.

He did and eventually worked his way up to running for the officer team. Penner said he lost the first election by one vote to an opponent who shared his campaign slogan, “I’m not the best choice; the other guy is.”

He ran unopposed the next year and became a KAWG officer. Penner was actively involved in the effort to create Heartland Plant Innovations, the for-profit company developed by Kansas wheat farmers to provide advanced plant breeding services for wheat and other crops, now specializing in doubled haploids.

“I was on the ground floor when the company started,” he said. “It will continue to bring tears to my eyes when I think about it.”

After thoughtful discussions with his wife and other wheat industry leaders, Penner decided to jump to serving on the NAWG board and then running for the officer team. He was elected Secretary-Treasurer in 2011 and subsequently served as Second Vice President and First Vice President before being elected as President in 2014.

Penner said that serving as an officer in the national wheat organization is time consuming, but the lessons learned from working with wheat farmers in 22 states is worth it.

“It is amazing the amount of knowledge you can acquire if you are observant,” he said. “It really broadens your horizons.”

Beyond personal lessons, Penner said he appreciates the impact that grassroots action can have on policy. For example, he proudly recalled helping advocate on Capitol Hill for the farm disaster aid package passed in 2006.

Just a year after Hurricane Katrina, Penner said the farm community was working on a $4 billion aid package for farmers hit hard by a years-long drought. He remembered the White House called it inflationary, and Congress had just passed relief aid for those affected by the hurricane. Still, Penner said that once the Congress learned from farmers about the impact it was having on their livelihoods, they were able to get the legislation passed.

“It was a big struggle to get that through,” he said. “It really brought a lot of farmers together.”

That unification means even more for the wheat community. Penner said that working for the national wheat industry can be more challenging than for other commodities as wheat is grown across the country and each wheat class and growing region has its own issues and concerns.

“The wheat industry is more fractured than other commodities,” he said. “To get all six classes unified on an issue is a remarkable feat by itself.” 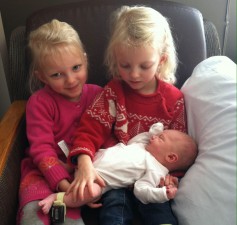 When asked about what his plans are after turning over the gavel, Penner simply replied, “Visiting grandkids.”

He has three, and he promises that they are not short of their own ag education.

“They are not going to be naïve about where their food comes from. I want to instill all of this love of agriculture and food in them. I hope it is infectious,” he proclaimed. “Even if they do not become farmers, I want them to be aware of all the tremendous opportunities to work in the food industry.”

Echoing his agvocacy in his own family, Penner called for the next generation of wheat industry leaders to make consumer education the next top priority for agriculture.

“As I move into the sunset of my tenure as a NAWG officer, the future is challenging and encouraging,” he said. “We are going to have to find ways to relate agriculture to people who are generations removed from the farm and communicate that farmers are stewards of their land and take their job seriously.”