MANHATTAN, Kan. – Kansas State University researchers have published recent findings that highlight their discovery of a gene in ancient wheat that gives superior strength and elasticity to bread dough.

Liangliang Gao, a post-doctoral scientist in K-State’s Wheat Genetics Resource Center, said the work is part of a larger project involving research groups worldwide and spanning more than 50 years of collecting 242 unique accessions of Aegilops tauschii, a wild goatgrass that is one of the parent species of modern bread wheat and has a history that reaches nearly 10,000 years.

“The newly discovered lineage is pretty limited in geography, though it may have been more spread in the past,” said Gao, noting that Aegilops tauschii is primarily found in present-day Georgia in the Caucasus region that spans parts of Europe and Asia.

K-State’s work is published in the academic journal, Communications Biology. The university’s team was led by recent doctoral graduate Emily Delorean and adjunct professor Jesse Poland, and paired researchers in the Wheat Genetics Resource Center with those in the Feed the Future Innovation Lab for Applied Wheat Genomics.

“Our group at K-State characterized the genetic diversity of an important gene for bread-making quality and found a trove of unique versions, as well as the origin of the known superior version of the gene already present in modern wheat,” said Delorean, who was the lead author on the research paper.

Added Poland: “We were amazed to discover that this lineage has provided the best-known gene for superior dough quality.”

K-State’s researchers are partners in the Open Wild Wheat Consortium that includes 38 research groups from 17 countries. Their focus is to improve farm crops by exploring useful genetic diversity in Aegilops tauschii.

"Fifty or 60 years ago at a time when we barely understood DNA, my scientific forbearers were traversing the Zagros mountains in the Middle East and Syria and Iraq,” said Brande Wulf, a visiting scientist at the John Innes Centre, an international center of excellence in plant science, genetics and microbiology with headquarters in the United Kingdom.

“They were collecting seeds, perhaps having an inkling that one day these could be used for improving wheat. Now we are so close to unlocking that potential, and for me that is extraordinarily exciting.”

In a study published in Nature Biotechnology, the group of international researchers reported the vast genomic contributions of the wild goatgrass Aegilops tauschii that gave rise to modern bread wheat.

K-State’s Gao credited the work of the Wheat Genetics Resource Center, an internationally recognized facility founded by University Distinguished Professor Bikram Gill that hosts a large gene bank, including more than 3,000 wild wheat accessions and 4,000 cytogenic stocks – the genetic treasures produced by a lifetime of work by wheat scientists around the world.

Poland said many of the discoveries currently being made by the Open Wild Wheat Consortium rely almost entirely on collections from K-State’s Wheat Genetics Resource Center. He said two members of the center – Jon Raupp and Duane Wilson – have collected and cared for the collections for several decades.

“Our collaboration with the Open Wild Wheat Consortium will help that organization do better science,” said Gao, who lauded Delorean and Paula Silva for their work on the project. “It also benefits K-State because ultimately we are discovering high impact tools to help farmers and wheat breeders develop better varieties.”

He said staff in the Wheat Genetics Resource Center continue to search for more genetic discoveries in wild wheat ancestors, including partnerships with wheat industry members in the National Science Foundation Industry / University Collaborative Research Center. Gao is leading an IUCRC project in which he and USDA scientist Mary Guttieri (located on the university’s Manhattan campus) and K-State wheat breeder Allan Fritz are profiling additional genes from the wild wheat relatives for potential use in improving milling and baking qualities. 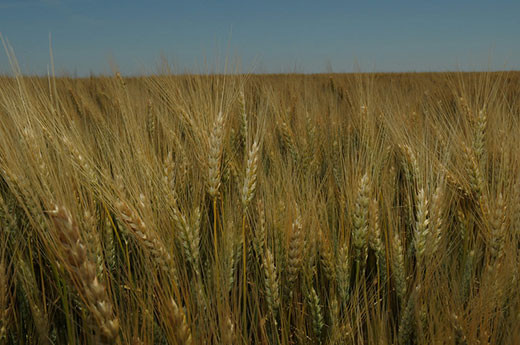