The Wheat Breeding program at Kansas State University is about more than just developing new wheat varieties for Kansas. While the release of superior varieties is an end goal of the program, many other aspects benefit Kansas farmers. Many of the wheat varieties that are released, from both public and private entities, have pedigrees from K-State varieties.

A few of these benefits include the ability to develop future wheat breeders, perform long-term research and collaborate with a wider scientific community.

The programs are funded by Kansas State University, Kansas Wheat Commission and Kansas Wheat Alliance. The funding from wheat farmers is used for operation of the program, including staff time to plant and harvest in excess of 20,000 yield plots per year, equipment purchases and upkeep, and travel to plots across the state.

The public breeding program helps to develop the future of wheat breeders for the industry. The program employs graduate students and post-doctoral research assistants, who graduate and go on to work in other public and private breeding programs. These breeders will in turn shape the future of the wheat industry, but their roots will be firmly planted in their training in Kansas.

New technologies are being used

Development of a new wheat variety is a long-term process. It takes about 12 years from the initial greenhouse cross until that new variety is available to farmers. With new technologies available, that development time is decreasing. These new technologies include high throughput phenotyping, genomic selection, doubled haploids, speed breeding and DNA markers.

“We’re really on the front edge of implementing these things and putting them into the breeding program and learning how to harness their power,” said Fritz.

With the recent completion of the sequence of the wheat genome, the industry is on the forefront of additional technological advances. A genome sequence is like a map for wheat researchers. Think about going on a trip with no map. You will probably end up where you wanted to go eventually, but it will require extra time, wrong turns and headaches. The wheat genome sequence allows researchers to have a tool to guide them while experimenting with valuable traits for Kansas wheat farmers at a more rapid pace.

“It gives you some tools to really do some novel things. We’re really at the front edge of having the tools and knowledge to do some very interesting things and potentially revolutionary things with that kind of technology,” said Fritz. “So having these technologies is a part of making sure that we’re really providing the advantages for Kansas producers.”

Because of the continued long-term investment in the program, breeders are able to work on projects that won’t provide a return on investment in the short term. One of these allows them to bring in the diversity of wild relatives of wheat.

While generations of cross-breeding have led to modern varieties with better yields and disease resistances, this has meant that other valuable traits found in wild wheat relatives have been left on the table. Wheat researchers are now on a treasure hunt to find those traits and breed them back into our modern varieties.

“The genetic diversity that we’re bringing in will benefit all of the wheat community.” Fritz said, “We can take some chances on some things that aren’t entirely appropriate for a private breeding program to do, things that wouldn’t make sense in terms of revenue projects.”

Another benefit of the public breeding program is the access to so many scientists and researchers and the ability to collaborate with other departments at K-State.  This includes other departments like entomology, plant pathology, agronomy and grain science, just to name a few.

“What’s really cool about being a wheat breeder at K-State is that you have all these resources around you to make your program better,” said Fritz. “The varieties we’re producing are really the product of not just the effort that’s in our program, but there’s all this other research effort that’s going on at K-State as well, that feeds information into that. We’re just really fortunate to have that infrastructure behind us. That’s a lot of the secret to our success.”

With these benefits, it only makes sense that the K-State breeding program only releases varieties that offer an improvement over the other varieties in the marketplace. 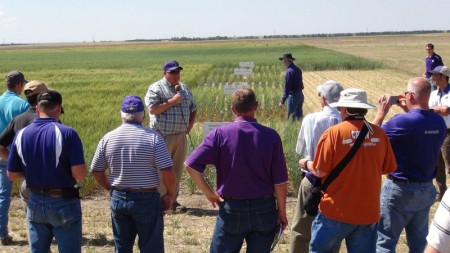 Fritz talks about varieties in comparison to a three-legged stool. First, there must be yield potential or farmers won’t grow it. Second, there must be a way to protect that yield through disease resistance, heat tolerance, insect resistance and all of the pieces that go into yield protection. And the final component is quality, which means that the variety will meet the industry standard for baked products.

Fritz says their release philosophy has always been relatively conservative, so they don’t release a wheat just so farmers have another choice to sort through. He says, “In general, we’ve really tried to make sure that when we bring something forward through KWA it is really what we think is a really good fit for production and has real value on acres.”