Kansas State University recently released three new wheat varieties, which are available to Certified seed growers this fall and will be available to farmers in fall 2020.

The new releases include two hard red winter wheat varieties – KS Western Star and KS Dallas – and one hard white wheat, KS Silverado. They were all developed at the K-State Agricultural Research Center in Hays, Kan. The wheat breeding program at Kansas State University, with locations in Manhattan and Hays, receives funding from the Kansas Wheat Commission through the two-cent wheat checkoff.

Thanks to wheat breeding programs like the one at K-State, producers have ever-improving options of wheat varieties to plant. Whether it’s improved resistance or increased yields, wheat breeders are creating varieties that meet producers’ changing needs. 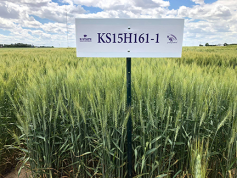 KS Western Star was named after the Western Star Milling Company in Salina, Kan. It is adapted to central and western Kansas, eastern Colorado, northwest Oklahoma and southwest Nebraska.

KS Western Star is a medium maturity and medium tall statured variety. It had greater yields than any other hard red winter wheat varieties in the KIN tests in 2017 and 2018. On average over the two years, it yielded more than any common check varieties, including Joe. KS Western Star has resistances to stripe rust, leaf rust and soilborne mosaic virus. It has very good straw strength and grain shattering resistance along with good milling and baking qualities. KS Western Star has good pre-harvest sprouting resistance. 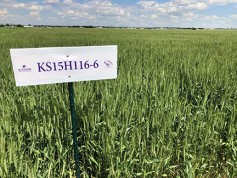 KS Dallas was named after retired plant pathologist Dr. Dallas Seifers, who worked at the K-State Agricultural Research Center in Hays and helped to develop the WSM2 gene found in the varieties KS Dallas and Joe. It is adapted to the western half of Kansas, eastern Colorado, northwest Oklahoma, the Texas panhandle and southwest Nebraska.

KS Dallas is a medium maturity and medium height variety. It performed well in western Kansas in 2017 and 2018. KS Dallas has a strong disease package with wheat streak mosaic virus resistance up to 70°F, which is three degrees higher than those resistant varieties with WSM2, such as Joe and Oakley CL. It has moderate resistance to stripe rust and good resistance to leaf rust and stem rust. It is susceptible to soilborne mosaic virus and moderately susceptible to Hessian fly. It has good shattering resistance and pre-harvest sprouting resistance. Its straw strength is about average, which is similar to T158.

KS Silverado is a hard white wheat with medium-early maturity and medium-short height. It is adapted to central and western Kansas. It has very good pre-harvest sprouting resistance. Its shattering resistance is moderate, which is similar to Joe. Its straw strength is very good.

Whether you are looking for high grain yield, rust resistance, heat and drought tolerance, resistance to wheat streak mosaic virus or milling and baking quality, Kansas State University’s wheat breeding program has a variety for you. These three new varieties will be available to Kansas wheat farmers in fall 2020 through Kansas Wheat Alliance associates. Visit kswheatalliance.org for more information on these and other wheat variety options.