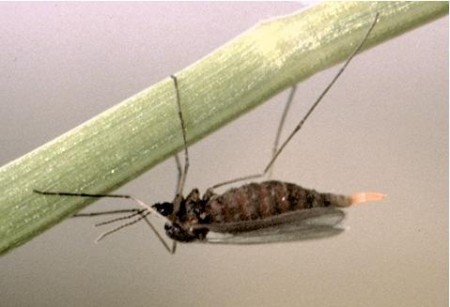 We humans may not have adapted to this summer’s sweltering rays, but for a few agronomic pests, warmer weather is what makes them thrive.

With temperatures rising and insects adapting, the days of following a “fly-free” date for wheat planting are fading. In the past, a “fly-free” date meant that after a certain day in October, depending on location, wheat could be planted without weeds and without infestation of Hessian flies. When flies started showing up in October and into January, Mike Smith and his team of scientists including Jeff Whitworth, Dr. Holly Schwarting and Dr. Ming Chen, started to investigate how temperature was affecting these populations.

“We started looking at varieties, and we started seeing that some of these varieties that used to be resistant were no longer resistant,” said Smith, professor of entomology at Kansas State University.

In a controlled environment consisting of about 12 Hessian fly resistant varieties of wheat grown in Kansas, it was found that only half were actually resistant and the other half weren’t. This led to this year’s project, an actual field experiment with wheat planted at different areas in the state looking at Hessian fly resistant varieties, known susceptible varieties and some new varieties with unknown resistance. Smith is looking for the same thing to happen in the field as in the growth chamber to see how the resistant genes hold up against higher temperatures.

“It’s also known that some Hessian fly resistant genes in wheat are affected by higher temperatures, but we don’t know enough about the pedigrees of these lines to know if that’s the case. We don’t know if this is a change that’s occurring in all of them or why it’s occurring in some and not others,” said Smith. “But the bottom line is, not only the climate changing but also something in the genetics of the varieties is changing. So that’s what we’re trying to get to the bottom of.”

These varieties will also be screened for resistance to the wheat curl mite and Russian wheat aphid. Although the most visibly destructive pest is the Hessian fly, these other pests are known to cause significant damage.

“Hessian fly’s probably the poster child for wheat entomology or has been for a long time. However, the wheat curl mite is becoming more of a problem and the mite is a problem not necessarily because of the damage it can cause when it feeds on the plant. The wheat curl mite vectors three significant viruses on wheat: wheat streak mosaic, Triticum mosaic and wheat mosaic,” said Smith.

The combined losses of the mite feeding and vectoring viruses can sometimes be as high as the Hessian fly, of up to 15-20 percent yield loss, according to Smith. Some locations in some states that have a very concentrated epidemic of a virus can see up to 100 percent yield loss.

Although the Russian wheat aphid poses the lowest threat statewide, dryland wheat of western Kansas and eastern Colorado is particularly susceptible to this pest.

“Higher temperatures are what’s causing us to see the effects, but it could be higher temperatures and drought. We know that in a lot of cases that when a drought stresses a plant, it will make it more susceptible to feeding of insects and to viruses,” said Smith.

Smith and his team anticipate finding that varieties claiming resistance may now be susceptible to certain pests and that some of that change is due to temperature. If they are successful in their research, it will provide a basis for crop improvement and give direction on how to adapt wheat to combat changes in the environment and pests.

“It’s all under the umbrella of trying to improve the crop, and in cases where we get really lucky we might have some varieties that have multiple resistance to multiple pests. That’s our long term goal,” said Smith.