For the world of wheat, the country of Iraq conveys many lessons for Kansas wheat farmers from the origin of the crop they grow to one of the most price competitive markets in the world. All factors combined, Iraq ranks as the sixth largest hard red winter (HRW) customer based on a ten-year average, but U.S. imports swing wildly from 79.6 million bushels (2.165 million metric tons (MMT)) in 2007/08 to 1.95 million bushels (53,000 MT) in 2013/14.

One reason for this wide variation is that Iraqi farmers do grow wheat, primarily in the same region where the wheat plant itself originated. This land between the Tigris and Euphrates rivers is referred to as the Fertile Crescent and wheat was first grown here more than 10,000 years ago.

Today, Iraqi farmers grow up to one third of the estimated 235 million bushels (6.4 MMT) of wheat consumption, according to U.S. Wheat Associates (USW). This wheat is blended with imported wheat and the resulting flour is used to make the Iraqi staple flatbread.

Ian Flagg, USW Regional Director for the Middle East and North Africa, explained that Iraqi families need higher protein to produce their flat bread than those in neighboring countries, primarily because of how they bake it.

“Most other Middle Eastern countries can use soft red winter (SRW) or soft white (SW) since they cook in a traditional bake oven,” Flagg explained. “Bakers in Iraq need strong wheat, hence the HRW, because they cook in a round tandoor oven and the gluten content must be strong enough to adhere to the sides of the cooking vessel.”

While Kansas farmers are the best in the world at growing the medium protein hard wheat needed for this type of flat bread, Flagg explained that they are not the only ones. European countries like Germany, Poland and Romania, as well as the Black Sea region, all produce wheat in the 11.5 to 12 percent protein range. These other suppliers are often closer geographically and lower quality may also cost less than U.S. HRW.

From there, the majority of flour in Iraq is dispensed according to the Public Distribution System (PDS), the world’s largest food distribution system through which the government provides a monthly basket of goods to qualifying citizens. That basket includes flour as well as rice, sugar, vegetable oil and baby milk formula. According to USW, 95 percent of the Iraq population qualifies for the PDS.

Flagg explained that this program accounts for the majority of Iraq’s wheat consumption.

“The monthly allocation is nine kilograms per person, so you are looking at 165 million bushels (4.5 MMT) of wheat in the PDS,” he said.

This massive program is not without controversy. As Obaid explained, the Oil for Food program was established by the United Nations Security Council following the Gulf War to help alleviate hunger issues caused by economic sanctions. The program required a set share of revenue to go to spending money on food and medicinal supplies, including wheat. The PDS was how those goods were distributed to Iraqi citizens.

While the program had altruistic intentions, it was riddled with corruption issues and led to international controversies. That included the eventual removal of the Australian Wheat Board monopoly, which had provided kickbacks to the Iraqi regime in exchange for a majority share of the import market.

Today, even though the regime is gone, the PDS remains a strong component of feeding families and continuing demand for imported wheat.

“There are so many low-income families in Iraq, and this sector relies a lot on the flour they receive from the PDS,” Obaid said. “So, in case the PDS stops and if the government will not take serious active procedures, there would be many families in famine.” 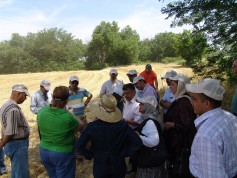 Kansas farmers play their part in ensuring those families have access to the high quality wheat grown in the state. As the industry’s market development lead, USW works to educate Iraqi officials and millers on everything from grain marketing to logistics to storage. Those efforts have included trade teams to visit the state as well as attending courses at Kansas State University’s IGP Institute.

While U.S. wheat may not always be the most price competitive in Iraq, thanks to these efforts, Iraqi government buyers know that the U.S. wheat store is always open to help meet their needs.