The expected turn to U.S. wheat supplies appears to be underway.

U.S. wheat exports to price sensitive markets and to typically self-sustaining markets are on the rise due to increased price competitiveness. Fueling this demand for U.S. wheat is, in part, shrinking wheat supplies, especially of high-quality milling wheat following decreased production in half of the world’s major wheat exporters — including Australia, the European Union (EU), Russia and Ukraine. The shrinking supplies in these countries have lifted their domestic and export wheat prices significantly over the past few months. At the same time, a large, high-quality crop pressured U.S. wheat prices lower, resulting in a convergence not seen for several years. 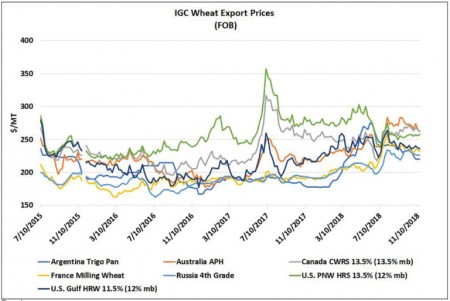 U.S. durum sales are also benefiting from increased price competitiveness. IGC data shows French durum and U.S. durum from the Great Lakes are now at parity at $240 per MT after French durum production was hurt by poor growing conditions. U.S. durum export sales are up 54 percent year over year at 400,000 MT with the EU being the largest buyer, followed by Algeria and Nigeria.

Despite the increased demand for U.S. wheat, U.S. wheat futures remain at or near marketing year lows, pressured by excellent winter wheat crop conditions and good soil moisture in the U.S. Northern Plains.

It is rare for U.S. wheat prices to be in such a competitive position, which represents an excellent opportunity for customers to lock-in their wheat futures price at these excellent levels.