Farmers near Radium, in Stafford County, are taking their combine passes in the fields slowly as they cut through dense, tough and abundant straw. Yields in the area are expected to be higher than average, but some fields planted earlier last fall did see substantial freeze damage. Large mud holes can be see in many fields, a sight that hasn't been seen to this extent in years, but something that will ultimately hurt final yields. Proteins in the area have averaged around 11 percent.

Ford County, Kansas has been lucky to start harvest says Jerald Kemmerer, CEO of Pride Ag Resources, LLC. Rain has been in the forecast almost every night and has been slowing down farmers. He reported that farmers have been in the field for a little over a week and are cutting like mad trying to get their fields done before yet another rain hits. Farmers have taken little over 10 percent of expected wheat bushels to the elevator.

“We have been dodging weather here,” he says.

Unfortunately the area was hit with some hail last week, but not too much damage was done, he says.
Average test weights in the area have hovered around 60 pounds per bushel and protein content is variable, but lower than average.

“It’s better than we thought it would be with all the wheat streak mosaic and leaf and stripe rusts  going on this year,” says Kemmerer. “The wheat with the disease has been ranging from 30 through 40 bushels per acre for yields.”

Doug Keesling, a farmer from Rice County says he has been in the field for a week and has been averaging 60 bushels per acre. Even in the hot and windy weather, his test weights have been between 62 and 64 and his protein is ranging from 8.8 to 12.7 percent.

Keesling says his crops this year have been similar to last year, but his yields may be down slightly. 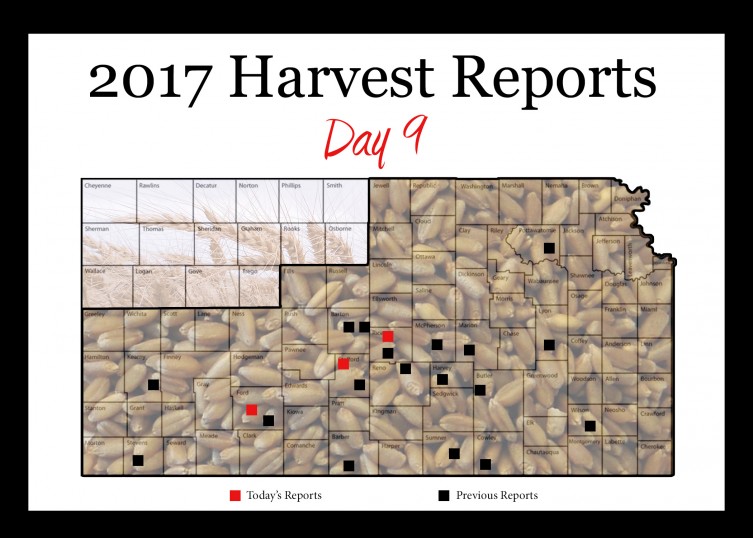