Combines are rolling on across Kansas as harvest slowly starts to inch north and west.

David Radenberg, a farmer near Claflin, reported that while he is around 50 percent done with his harvest, the average completion for the area is a little lower. Yields for the Radenbergs are ranging from 35-55 bushels per acre and test weights are remaining ‘excellent’ with an average above 60 pounds per bushel.

“I fertilized some with chicken manure,” said Radenberg. “The spots I did that in ended up yielding around 10 bushels an acre more, and that’s something that I was really impressed with.”

Kevin Kelly, manager of the Twin Rivers Coop in Arkansas City, reported that the area is 95 percent done with a ‘disappointing harvest.’

“This year we’re going to be about 55 percent of the five year average,” said Kelly. “The decline is due to average yields and acres going to fall crops.”

Kelly said that the average range for the area will be around 35-38 bushels per acre and test weights have ranged from 58-62 pounds per bushel.

“A lot of wheat was drowned out on our flat grounds,” said Kelly. “Farmers came in and said while they were cutting that one side of the field would make 20 bushels an acre while the other side would make 80.”

Disease pressure in the area was minimal during the growing season. The proteins in the area will be below average. Kelly predicts that harvest will be completely wrapped up by the end of the week.

Nicole Harrison of Rezac Land and Livestock in Pottawatomie County, reports that their harvest got rolling last Thursday, June 15. Their fields have averaged 64 bushels per acre, with 13.8% moisture. She reports that harvest is going well and says, “We never really saw much disease in it.” They will be cutting for at least another three days. 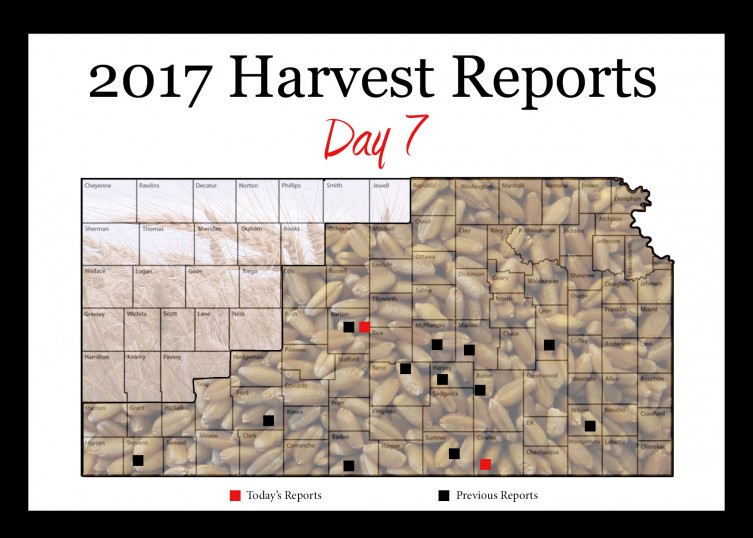