In the world of farming, 12 hours can make all the difference. David Schemm, a northwest Kansas farmer, reported that Wednesday night’s storms wiped out three fields of his wheat near Russell Springs.

“It’s frustrating because these fields were ready four or five days ago, but rain has prevented us from getting in the field,” said Schemm. “We were able to cut half of one of the fields the day before and it was yielding 30-35 bushels per acre. Now there are seeds lying on the ground, stems bent over, and that was just the side of the field I could get into. The other side got the brunt of it, but I couldn’t get in it to survey the damage.”

Schemm reported that the other fields had heads with good grain fill, so he was estimating a 40-45 bushels per acre average. Now, he isn’t so sure. He estimated there is at least 10-20 percent hail damage, possibly more.

Test weights in the area so far had been lower than average, but proteins were ‘much higher than last year.’ But, of course, high proteins only count if you can get the kernels in the bin. Farmers in the region are cutting quickly because the forecast is calling for more storms Thursday night.

“It’s been an interesting year,” said Schemm. “We started off excited about it, and even after the snow we thought we had a crop. Now I’m just ready to wrap it up, get it done and start to look forward to next year.”

Wheat streak mosaic virus (WSMV) is a disease that is plaguing western Kansas farmers this year, including Shayne Suppes of Dighton. Suppes reported that half of his wheat acres were lost to WSMV, lack of moisture or a combination thereof.

“There just wasn’t adequate moisture at planting time here,” said Suppes. “After planting there wasn’t a measurable amount of precipitation for 90 days.”

Now, an influx of moisture had prevented Suppes from getting into the field until Thursday. His first rounds of cutting saw 12-13 percent moisture and lower than average test weights.

Mike McClellan, Plainville, was rallying his harvest crew to finish off a pair of small fields before storms rolled into the area.

“These fields are yielding about 60 bushels to the acre, and it’s some of our better wheat so far,” said McClellan.

McClellan reported that his worst field so far had 30-40 percent hail damage, a story that sounds familiar to many farmers in the area. He also lost one field, with several others sustaining severe damages, from WSMV.

“We may be cutting until Christmas at this point,” joked McClellan. “But I am aiming to get it done by July 15th.” 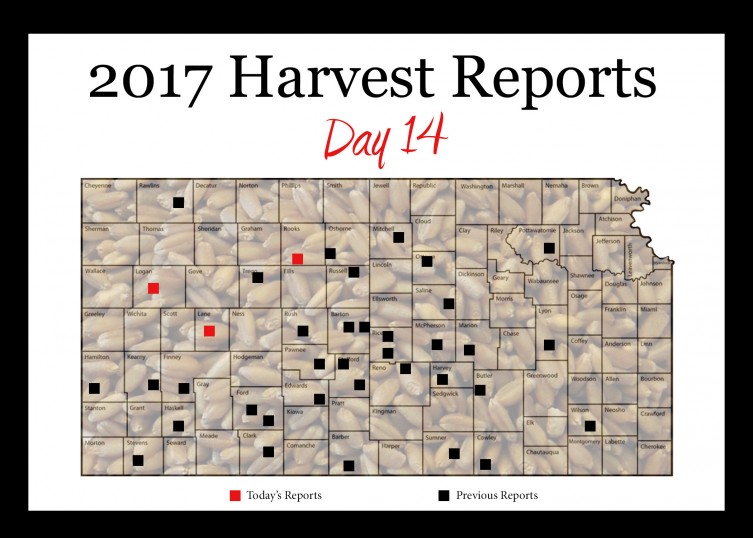