In Pierceville, harvest started on the June 16. Dustin Siek, location manager of Irsik and Doll Feed Service, reported 230,000 bushels of wheat have been taken in since they started harvest.

He added yields have been around 30 to 40 bushels per acre and test weights have been averaging 61 pounds per bushel.

“This year has been a lot slower getting in the field,” he noted. “Yields haven’t been nearly as good as last year. It’s been cool and wet, making harvest difficult.”

Richard Harmon, general manager of Mid State Farmers Coop of Rush Center, says harvest has been going for a solid 12 days with some rain delays here and there.

He added they have taken in 1.3 million bushels of wheat in their six locations since harvest began and yields have been averaging 45 to 50.

“Test weights have been hanging in there. We haven’t cut since Friday because of rain, but we’ve seen test weights ranging around 59-60 pounds per bushel since we’ve started back up,” said Harmon.

He also said proteins have been all over the board this harvest and have been running at the same levels as last year.

At the WaKeeney branch of Frontier Ag, Inc., Taylor Myers, location manager, reported harvest began roughly a week ago. He said they’ve taken in around 80,000 bushels of wheat.

“Yields have been all over the place. Disease has been bad enough that some farmers swathed their wheat. The highest yields we’ve seen are in the 40’s,” said Myers.

Test weights have been averaging 57 to 58 pounds per bushel and proteins have been around 11.7 percent he reported.

Wheat streak mosaic virus is the main disease culprit in the area, he added.

“This year acres are quite a bit smaller. Acres have been down, and disease has been up,” Myers said.

Jason Ochs, who farms in Hamilton County, reported that his wheat is doing better than the county average. He planted hard white wheat varieties Joe and Clara CL that have some resistance to wheat streak mosaic virus, which has shown up throughout the county. The mosaic has caused low test weights and yields in the range of 1.5 to 4.5 bushels per acre. Approximately half the county’s acres won’t even be harvested.

Acres that were planted later are producing better yields. Ochs says his later planted fields are yielding over 50 bushels per acre and test weights have remained strong at 62 pounds per bushel. 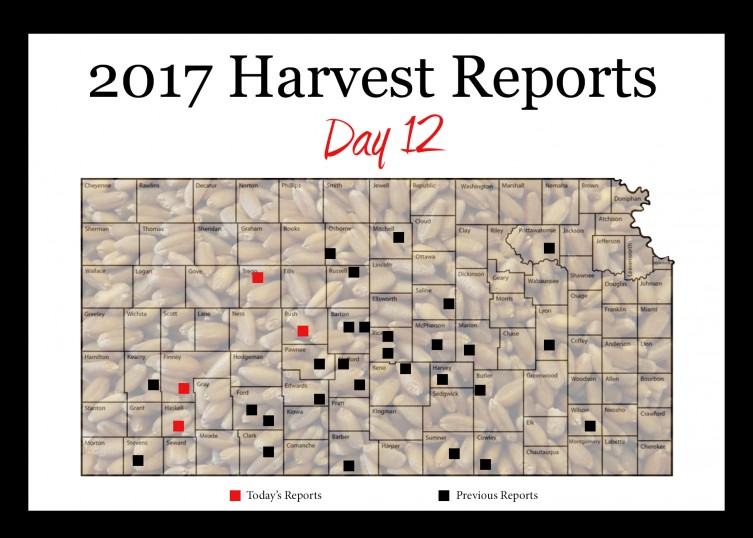