A mom of two boys and blogger for “Tales of a Kansas Farm Mom,” Nicole Small from Neodesha, Kansas, is also a full time combine driver during wheat harvest. Twelve years ago when she was pregnant during wheat harvest and couldn’t handle the heat of the grain trucks, she was put in the driver’s seat of the combine. Little did she know she would continue to be the combine driver during harvest every year after that. 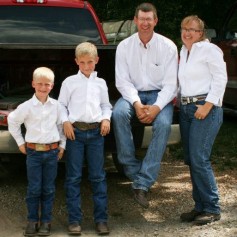 Small and her husband Randy are the sixth generation to farm and ranch in Wilson County where they have taken over both of their retired fathers’ farms. Together they grow wheat, corn, soybeans, and milo, as well as operate a 300 head cow-calf operation. Along with raising crops and livestock, they are busy managing two growing boys Dexter, 12 and Maddix who is 9.

Harvesting wheat is enjoyable for Small because her boys are no longer in school during the summer and the whole family can participate. To some extent the two boys enjoy riding with her in the combine. However, she says it was much easier when they were younger and slept most of the time.

“For an hour or two they are great, after four hours they get kind of tired, and at six to eight hours they are ready for somebody to come rescue them from the combine to go and do their chores at home,” said Small.

The everyday challenges and working outside are what Small enjoys most about farming. She likes to share these experiences on Facebook and Instagram as well as on her blog “Tales of A Kansas Farm Mom.” This allows her to answer questions from friends and inform consumers about where their foods come from and how it is produced.

“No two days are the same,” Small said. “I might have a plan for what needs done, but every day something seems to pop up and make it interesting.”

Small has served on the soybean board and her husband is on the corn commission.

This year they have approximately 1000 acres of wheat planted.

“Until about a month ago I thought it look really promising. Then it started raining for three weeks,” said Small.

Small says all the rain they received has been really hard on their wheat crop. In the month of May they noted that they got over ten inches of rain. The mud produced by the rain caused them to be unable to get in their fields to spray fungicide. The wet ground has also made it difficult for them during this year’s harvest. Small says that the fields in her area are still very muddy.

“I am running duals on the combine right now on no till ground so I haven’t been fighting the mud like some of the neighbors have,” said Small.

Small started harvesting a week ago on June 20, and is currently about 95 percent finished. She reported that her yields have been ranging from very poor to good with some fields yielding approximately 45 bushels per acre.