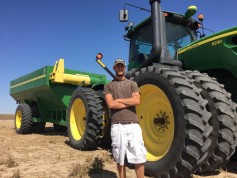 Farming west of Garden City positions Jeremy Millershaski roughly in the middle of his two favorite off-farm hobbies – snowboarding at Monarch Mountain in Colorado and hanging at Lake Wilson. But, with building a house this year, this wheat farmer has been a bit too busy for much of either.

After all, Jeremy farms 80 quarters around Lakin, Kansas, with his brother, father and grandfather. The mostly no-till operation is large enough that in good years, Jeremy said up to five combines will be harvesting wheat at once – making Jeremy’s harvest job, keeping pace with the grain cart, a lot harder.

For the past few years, however, those extra custom harvesting combines have driven right past Lakin due to short wheat crops in drought conditions. This year, Jeremy said the rains this past spring helped salvage many of the fields he expected to be destroyed once again due to drought. However, Jeremy reported that rust was a limiting yield factor as well as devastating hail that severely damaged fields just before harvest started.

Jeremy lamented that wheat that was hailed out was still making 20 to 30 bushels per acre, but would have made 45 to 50 bushels per acre without rain delays and storm damage. In fields that were spared, Jeremy reported patches yielding up to 70 bushels per acre. Test weights are “all across the board,” but reaching 60 in the best patches.

No matter the weather, the Millershaskis farm together. Jeremy’s father Gary relocated to Lakin after marrying wife Jana – as all of Gary’s brothers farmed, but none of hers did. Jeremy himself returned home to the farm after earning a degree in agricultural economics from Kansas State University and his brother Kyler plans on doing the same. But, Jeremy is quick to point out that even with the extra help, his grandfather Earl Kleeman, who started the operation in 1930, is still actively involved in the operation.

“My grandfather is still on the tractor every chance he gets,” Jeremy said. “He said he will retire when he hits 100.” 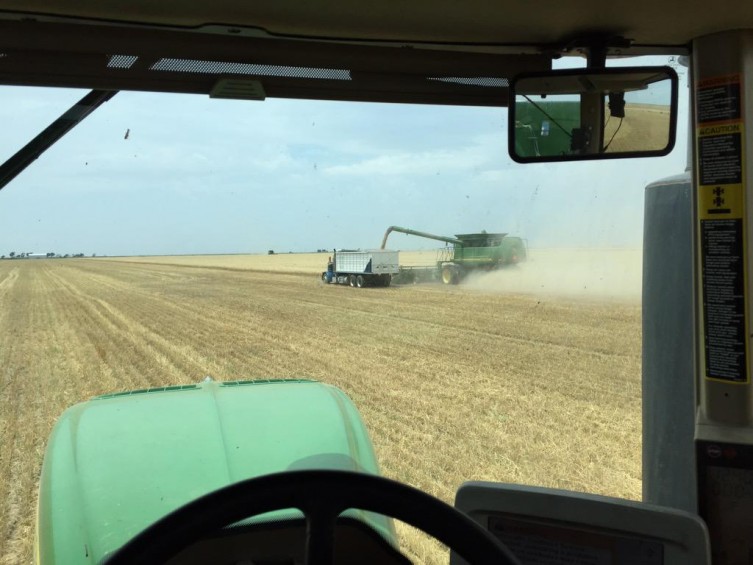