Until now, resistance to the aphid-vectored virus known as barley yellow dwarf (BYD) has been limited, at best, in wheat. This serious wheat disease in Kansas has had reports of yield losses of up to 35 percent. Suggested risk management practices such as adjusted planting dates and using insecticides are effective in the short-run, but not enough to control the disease as a whole. What if there was a way to beat this disease, once and for all? 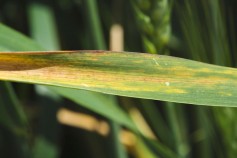 Research lead by scientist Bernd Friebe at Kansas State University and the Wheat Genetics Resource Center I/UCRC may provide a way to control BYD through fabricated genetic resistance. The objective of his current research project is to identify naturally-occurring sources for BYD resistance and transfer them into adapted Kansas winter wheat cultivars. The use of cultivars with genetic resistance to the virus or the aphid vector is the most economic and practical way of controlling BYD.

“For the environment, it’s always the best solution if you can use native resistance,” said Friebe. “If you have genetic resistance then it doesn’t matter if the vector is floating around. They can do whatever they want to the plant, and not infect it.”

To encounter resistance, Friebe and his team start with evaluating chromosomes from wild relatives of wheat for agronomically-interesting traits and then combining modern wheat with wild wheat to produce recombinants that can be used directly in wheat improvement. A recombinant with a resistant gene to wheat streak mosaic virus, Wsm3, was derived from a wild wheat species called Thinopyrum intermedium. This recombinant also contains resistance to Triticum mosaic virus and has the potential of also containing resistance to BYD. Finding these recombinants, however, is time-intensive.

“If you already have chromosome addition lines, it can take three to four years to find recombinants with shortened chromosome segments. If you start from scratch by crossing wild relatives to wheat then it might take ten years to produce recombinants having the trait of interest,” said Friebe. “It’s the only way you can make the distantly-related gene pool available for wheat breeding. It’s trickier and it’s also a numbers game. Some chromosomes recombine easier than others.”

This gene transfer process is not a simple task and the talent to apply the technique is rare. Manipulation under a microscope can be extremely difficult and time consuming, resulting in fewer people getting into the field. Friebe, and his team of scientists including Dal-Hoe Koo and Tatiana Danilova, are among a handful of people worldwide who are able to do this chromosome engineering. Resistant genes are invaluable, but perhaps more so are the dedicated scientists who can artfully extract that value.

Value, in the end, will be added back to farmers who can use the resistant wheat in their fields, eliminating the need to unsuccessfully control aphid populations or time their planting just right. The future for BYD may be bleak, but the future for farmers is bright.