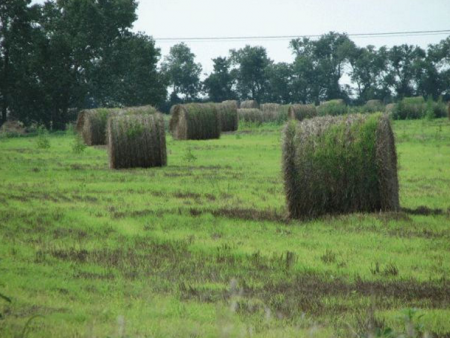 Volunteer wheat doesn’t all emerge at the same time, unfortunately. Some can start emerging early where wheat in the heading stage was damaged by hail, said Dallas Peterson, K-State Research and Extension weed management specialist.

Where volunteer is emerging early, producers should consider making their first control measures sooner than they might like, he said.

“Producers often like to wait several weeks after harvest before making their first herbicide application to control volunteer wheat,” Peterson noted. “This allows as much volunteer as possible to emerge before spraying it or tilling it the first time. Often, a second application or tillage operation will be needed later in the summer to eliminate the green bridge to wheat.”

But where wheat was hailed out and volunteer has already emerged at the time of harvest, control should begin immediately after harvest if possible.

“Even if this ends up requiring one more field pass than normal to keep volunteer under control throughout the summer, starting early in this situation will help prevent even bigger problems down the road. It should be noted that grazing volunteer is not an effective control option because there is green wheat material left and the mites survive in that material,” Peterson said.

Why the need for early control of volunteer in hailed-out wheat? Where wheat suffered hail damage after heading, volunteer often emerges even before the existing field is harvested – as much as two to three weeks earlier than it would normally emerge after harvest, he said.

This volunteer wheat is especially likely to become infected with wheat curl mites and lead to problems later in the season if left uncontrolled, said J.P. Michaud, entomologist at K-State’s Agricultural Research Center in Hays.

Wheat curl mites will move off growing wheat as the green tissue dries down and dies, Michaud explained. After moving off the existing wheat at or near harvest time, the mites need to find green tissue of a suitable host soon or they will die of desiccation, he said.

“Research has found that the mites can live quite a few hours off the plant, and up to 24 hours under low temperature conditions, so significant numbers of mites may be blown in from farther away than previously thought,” Michaud said.

If there is young volunteer wheat growing at the time the current wheat crop is being harvested in the nearby region, the mites can quickly infest those volunteer plants and survive, he said.

“If volunteer has emerged and is still alive shortly after harvest in hailed-out wheat, wheat curl mites could easily build up rapidly and spread to other volunteer wheat that emerges later in the season. On the other hand, if this early-emerging volunteer is controlled shortly after harvest, that will help greatly in breaking the green bridge. If more volunteer emerges during the summer, follow-up control will still be needed,” Michaud said.

Volunteer wheat is not the only host of the wheat curl mite, he added. Recent research has evaluated the suitability of wild grasses as hosts for both the curl mite and the wheat streak virus.

“Barnyardgrass topped the list in terms of suitability for both virus and mites, but is fortunately not that common in wheat fields. In contrast, green foxtail, although a rather poor host, could be an important disease reservoir simply because of its abundance. Take note of significant stands of these grasses in marginal areas and control them as you would volunteer wheat,” Michaud advised.

If volunteer wheat and other hosts are not controlled throughout the summer and are infested with wheat curl mites, the mites will survive until fall and could infest newly planted wheat at that time, he said. Wheat curl mite infestations of wheat often lead to wheat streak mosaic infections.

K-State Research and Extension is a short name for the Kansas State University Agricultural Experiment Station and Cooperative Extension Service, a program designed to generate and distribute useful knowledge for the well-being of Kansans. Supported by county, state, federal and private funds, the program has county Extension offices, experiment fields, area Extension offices and regional research centers statewide. Its headquarters is on the K-State campus, Manhattan.