Harvest is in full swing across the state for those with fields dry enough to get the combine in. The Kansas Wheat crew headed out to western Kansas this week to catch up with combine crews and visit elevators for an on-the-ground look at the 2022 crop.

Jon Berning with Berning Farms in Scott City was pretty happy with how the harvest is going. With only a day or two of harvest remaining, he is seeing a wide range of yields across the farm’s acreage from 35 to 80 bushels per acre. Test weights are heavy at 64 pounds per bushel and some fields have protein in the mid-teens. Moisture is varying between 11 and 12 percent.

Berning was grateful for his harvest crews’ help this year, which includes his son, another young man and a couple of harvesters from South Africa. One of his combine drivers will attend Newman University to study business or accounting next year on a golfing scholarship — proof that farmers and their help can and do occasionally get off the farm!

Rick Horton, who farms near Leoti in Wichita County, was also happy to be harvesting, mostly because he and his brother Alec invested in a new Claas combine. The brothers started cutting last Saturday, perhaps a day earlier than the wheat needed, to try out the new machine.

Wheat harvest began in earnest on Monday. With about a week left to go, yields are coming in at 64 bushels per acre with satisfactory test weights in the 60s pounds per bushel and 11 percent moisture.

The Horton operation is truly a family affair, with the brothers running the combines and their wives in the accompanying tractors and grain carts. Vance, Rick’s nine-year-old son, is already learning how to help out with harvest, continuing a proud family farm tradition.

At D.E. Bondurant in Ness City, the Kansas Wheat crew spoke with coop president Gary Gantz. The elevator took in its first load on June 13, and the area is now about three-quarters of the way done with harvest, well ahead of normal pace.

“I can’t remember a time when we were finished with harvest before the Fourth of July,” Gantz said, “but we should be wrapped up by then this year.”

With variations from nine to 14 percent, Gantz expects protein to average around 11.3 to 11.4 percent this year. Test weights are heavy at 62 to 63 pounds per bushel. 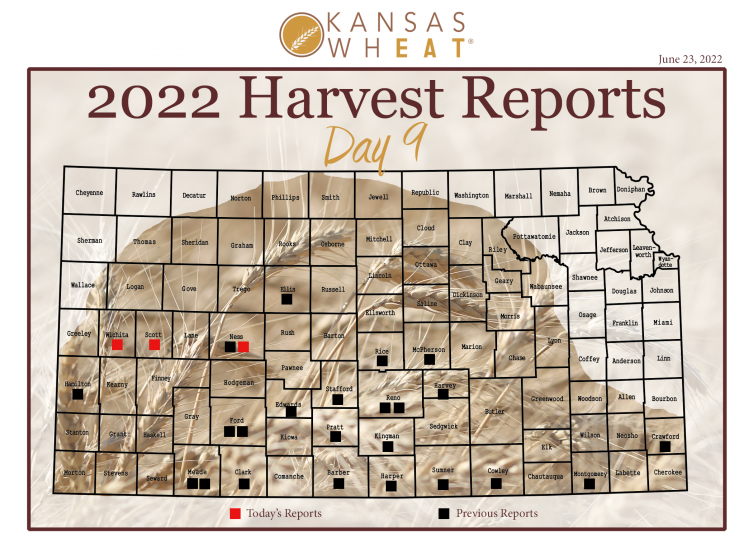