Joe Schauf, general manager of Central Prairie Coop in Rice County, reported they received their first load on June 7. Schauf said they are about 85 percent harvested in the area.

“Our test weights are surprisingly higher than normal,” said Schauf. “We have had test weights around 60 to 64 pounds per bushel. For your yields, they are probably averaging in the mid-30s per acre.”

Schauf reported proteins ranging from 13 to 16 percent, with an average nearing 13.5 percent.

Austin Taylor, location manager of Golden Valley Inc. in Pawnee County, reported to be about 35 to 40 percent complete with the harvest in the area. Before the rain this past week, he said the test weights were around 61.5 pounds per bushel. Taylor also said they had a handful of loads come in on June 12 and 13 but officially started on June 14.

“We are looking for our yields to be around a wide range of 30 to 60 bushels per acre, which is probably the same everywhere else,” said Taylor. “We ran a few samples of protein with some as low as 12 percent and some as high as 13 percent.”

In comparison to other years, Taylor said their average yields are lower than normal.  Taylor also reported a dry growing season with no rain in the area from last October until late April when the area received a much needed inch of moisture.

“Harvest has been an overall shock this year,” said Taylor. “We have gotten better yields, better proteins, and better production than expected overall. We thought there was going to be some shriveled wheat kernels, because of the lack of rain, but to our surprise there have not been any.”

Jerald Kemmerer, location manager of Pride Ag Resources in Ford County, reported receiving their first load on June 11. He said they are anywhere from 20 to 25 percent harvested in the area.

He estimates the rain will push back finishing harvest in the area until around the fourth of July. Kemmerer thinks there might be more showers next week, as well.

“For this year, the yields are exceeding what the farmers were expecting,” said Kemmerer. “We are seeing ranges anywhere from 15 to 25 bushels per acre up to 50 to 70 bushels per acre.”

Kemmerer also said the test weights in the area have not been an issue this year.  He reported test weights above 60 pounds per bushel with proteins being a little higher than normal.

“Compared to an average year, we have normal proteins, which tend to be higher than surrounding areas,” said Kemmerer. “We’re behind on moisture this year so we really want to get the crop cut sooner than later to avoid the weeds that might pop up.”

Kemmerer also said harvest is right on schedule for production and they would be farther into harvest if it was not for the rain this past weekend into Monday.

“But we are not upset at all about the rain,” said Kemmerer. “It was well needed for the crops. As long as there is no hail or a downpour of rain, we are happy with the moisture.” 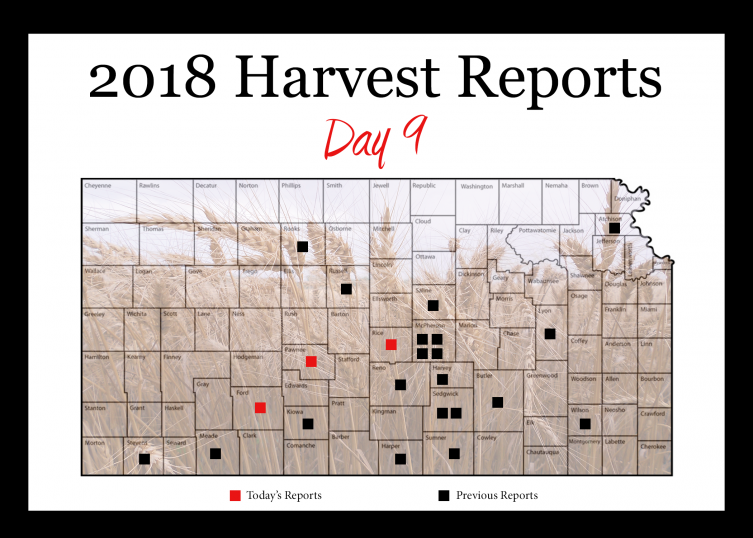