Scattered showers moved through Kansas on Tuesday night, pushing pause on the Kansas wheat harvest. Severe weather hit the eastern two-thirds of the state with gusty winds and a small, confirmed tornado in Ellsworth. Further west, rain totals didn’t amount to much, but the lower temperatures, high humidity and overcast conditions meant harvest was still under rain delay for many producers on Wednesday.

Ahead of the rain on Tuesday, Kansas Wheat staff stopped by the harvest field in Hamilton County. Jason Ochs, who farms near Syracuse, was cutting a field of hard white wheat that was coming in dry at nine percent moisture with a good test weight of 61.5 pounds per bushel.

Area yields are being reported at nine to 25 bushels per acre, but anything over 20 bushels per acre would be a stretch for this part of Kansas due to the extreme drought throughout the growing season.

On the county line between Stafford and Reno counties, farmer Randy Fritzemeier was about halfway through wheat harvest before a quarter inch of rain shut down cutting on Tuesday night.

Yields are disappointing in the low 30s bushels per acre, but the wheat is some of the best quality he has cut with test weights at 61 to 64 pounds per bushel. Despite lower-than-average yields, Fritzemeier was surprised at how well the crop turned out. He had to replant fields due to significant rainfall during planting, but then the weather turned so dry that the windstorm on December 15 filled the house with dirt. This spring brought around 1.5 inches of rain during heading and another 4.5 inches while kernels were filling, helping finish off the crop.

He had planned for a custom-cutting crew to help him finish off the wheat harvest, but with delays from the crew, Fritzemeier said he’ll keep cutting until they arrive.

Farmers expect to climb back into the combine cab as soon as field conditions allow, likely following triple-digit temperatures on Thursday and Friday. 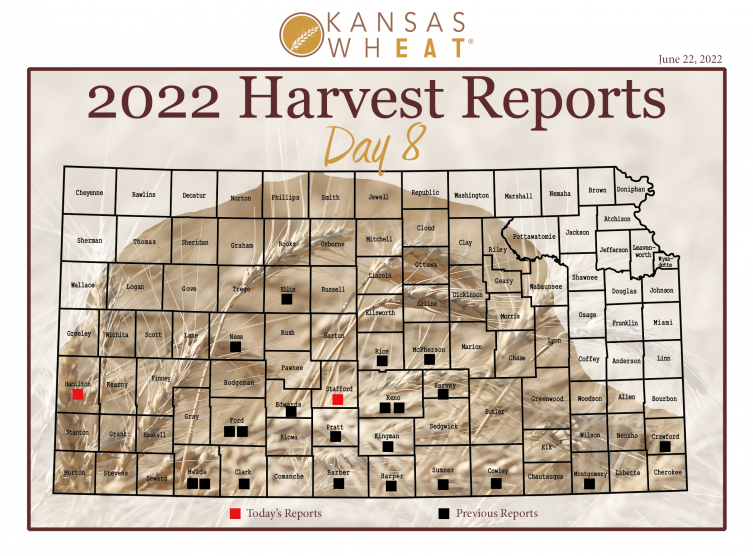