Laryce Schweiterman, who farms and raises seed wheat near Syracuse in Hamilton County, reports that they tried to start harvest on June 19, but moisture was too high, so they didn’t start again until June 22. So far, yields have been surprisingly good, averaging 40-50 bushels per acre, especially considering they have only received about 3” of rain during the growing season. They only planted about half of their normal wheat acres last year because they had a lot of moisture and could grow corn. Since then, moisture has been elusive, so they are planning to plant a lot more acres of wheat this fall.

The PlainsGold varieties Whistler and Langin and Kansas Wheat Alliance varieties Joe and Dallas have been performing well for them. They grow both hard red winter and hard white wheat.

Test weights have averaged 58-60 pounds per bushel and protein is averaging 11-12%. She estimates that harvest will be complete in the next 5-6 days.

Rusty Morehead from Progressive Ag in Wellington in Sumner County, reports that harvest started back up again on Tuesday, after they received from 1 to 5” of rain across their region over the weekend. He said test weight has dropped a little, but it’s still above 60 pounds per bushel. He estimates that harvest will be nearly complete before the next forecasted rain this weekend.

Troy Presley from CoMark Equity Alliance LLC in Cheney in Sedgwick County, reports they their area started harvesting again Tuesday, after 1.25-2.5” of rain over the weekend. He said they are about 80% complete. Test weights went down about 1 point, but remain above 60 pounds per bushel.

Calvin Williamson, who farms in Ford and Clark counties, reports that he received about 2” of rain over the weekend. His yields have averaged 60-70 bushels per acre, which is quite a bit higher than he expected. Williamson estimates that he will be finished with harvest in 2-3 days. The varieties T-158 and TAM114 are performing well. Test weights are 60-62 pounds per bushel, and protein is highly variable, ranging from below 10% to more than 12%. 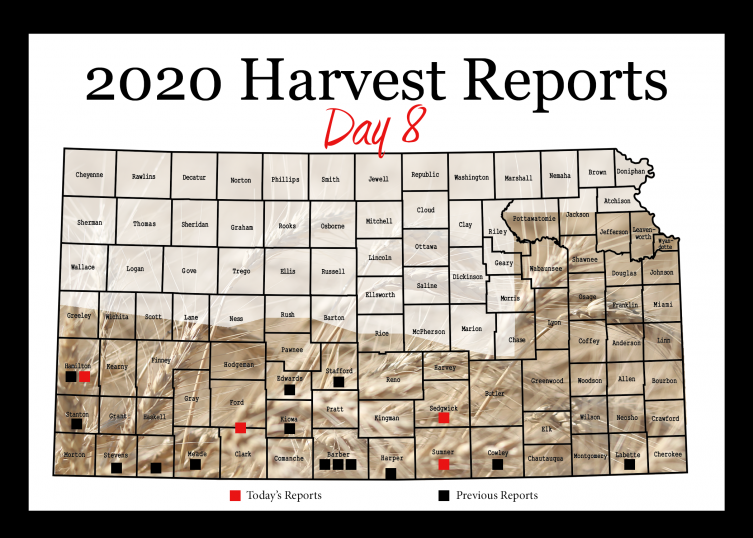