With an eye to the sky, Kansas producers are maintaining the rapid pace of the 2022 wheat harvest. In the weekly Crop Progress and Condition report, USDA National Agricultural Statistics Service noted that 27 percent of the wheat crop was harvested as of June 19, ahead of 11 percent last year and 18 percent for the five-year average. Statewide, the agency rated the wheat crop’s condition at 27 percent good to excellent, 33 percent fair and 40 percent poor to very poor.

Harvest is more than two-thirds complete in Cowley County, where the sun has been shining — keeping moisture levels low and combines moving quickly. Yields in the area are at 80 to 85 percent of the five-year average, according to Kevin Kelly, general manager of Two Rivers Coop in Arkansas City. Quality is decent, with test weights running close to normal at 60 to 61 pounds per bushel.

This growing season ping-ponged between adequate moisture in the fall, a dry spell in late winter and then almost too much rain starting in late March before drying off just in time for wheat harvest.

“We’re very thankful for what we’ve received,” he said.

Moisture received dried quickly, meaning no disease pressure in the area, but farmers looking to double-plant soybeans or with corn tasseling in the fields are watching the forecast for the next showers to arrive. The crop mixture in Cowley County has switched in the last few years, resulting in Two Rivers Coop taking in more soybeans than wheat. The dry weather means they can hold onto this year’s wheat harvest a bit longer than normal before cleaning out the bins to make way for the fall harvest.

Further north and west, harvest kicked off quickly in Ellis County late last week. Daren Fischer, general manager of Golden Belt Coop Association in Ellis, reported the wheat harvest is about a third complete, having taken in 350,000 to 400,000 bushels since the first load last Friday.

While the wheat is plenty dry — moisture between nine and 10 percent — and test weights good, Fischer is seeing a mix of poor wheat and better-than-expected wheat. Yields range from 20 bushels per acre to 50 bushels per acre, depending on variety, farming practices and whether or not folks caught spotty rains.

“The wheat has been pretty surprising because of the lack of rain,” Fischer said. “We just had some timely rains and wet snow that saved us. It’s just a luck thing.”

Not all farmers have been so lucky. The great white combine — hail — took out a substantial portion of the draw area for Coop Grain & Supply in Bazine, according to general manager Michael Kempke. The coop pulls from about a 10-mile radius, and the last two hailstorms affected almost 5,000 acres in that zone.

Harvest is progressing rapidly, about 40 percent complete after starting around June 13. Kempke noted the first few fields caught folks off guard by being so dry; moisture is averaging 10.8 percent. Harvest moves in the area from the southwest to the northeast, so he expects combines to run for another week as the more eastern fields continue to dry down.

Acres were already down in the area with producers rotating to more sorghum, driven by international demand. Kempke expects that trend to correct this fall with more folks returning to their normal crop rotations. 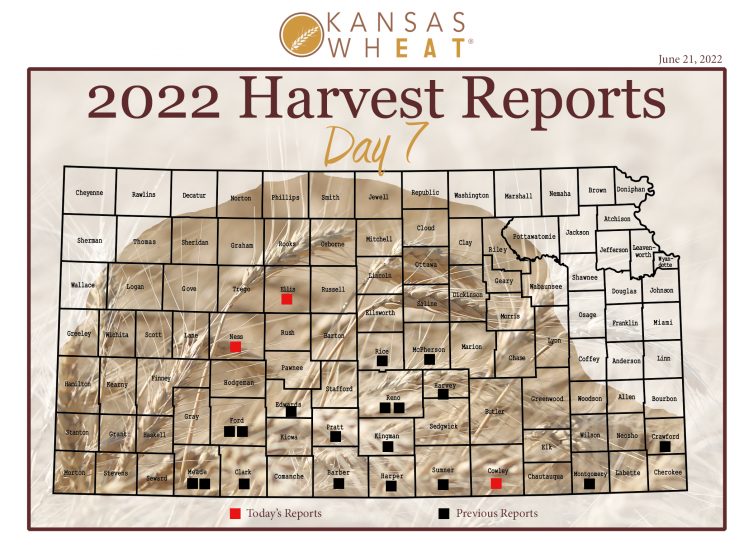