Matt Overturf from Skyland Grain in Johnson in Stanton County, reported that harvest began about a week ago and should be pretty much wrapped up in their western locations of Johnson, Big Bow and Manter by this coming weekend if they don’t receive any rain. Eastern locations of Moscow and Satanta did receive a little weekend rain, so wheat is coming in a little slower there.

Overturf said that with acres in the area down 15-20% from last year and yields half of last year, they will likely only see 1/3 of last year’s bushels in their locations. He said dryland yields are ranging from 15 to 30 bushels per acre, and irrigated fields are yielding about 45 to 50 bushels per acre. Test weights all over the board, but averaging about 58 – 59 pounds per bushel. He said they’ve seen a wide range of proteins, and definitely pockets of proteins, but the average is about 10 – 12%.

Overturf reported that there are areas in Stanton County that have only received 1 ½” of rain since last June. The five or six counties in the southwest corner of Kansas, southeast Colorado and Oklahoma panhandle are very short on moisture. Because of the drought, fall crops are also struggling, so Overturf predicts that there could be an increase in wheat acres this fall.

“If Mother Nature gives us a little help, we can grow a good crop,” he said.

Jason Ochs, who farms near Syracuse in Hamilton County, began his harvest on June 17, which was about the earliest in the area. He said yields have been highly variable, but he should average about 30 bushels per acre because his fields received some timely rains that others missed out on.

“Where the rains didn’t hit, yields won’t be as good,” he said. He said some fields are yielding as low as 5 bushels per acre.

Ochs says he will have about 30% more acres of wheat this fall because he had to prevent plant some fall crop acres due to the drought. He plants mainly hard white wheat, and says the Kansas Wheat Alliance variety Joe has been performing well. He estimates that Hamilton County is about 70% hard red winter and 30% hard white.

Harvest will be complete for Ochs by June 28, if they don’t receive any rain before then. But, rain would be a blessing, as it is desperately needed for fall crops. 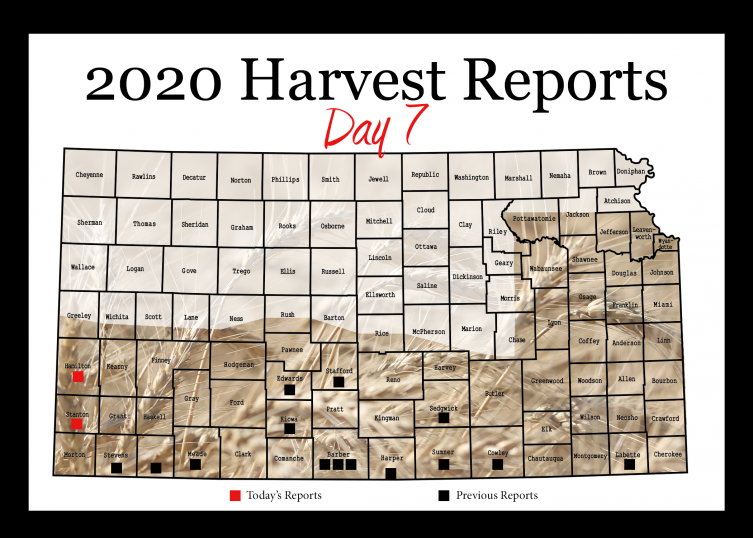