Harvest continues to advance northward as farmers seek out dry wheat fields in the hot summer wind. Diligent field management has made a difference — evidenced by satisfactory test weights — but disease pressure from stripe rust and Wheat Streak Mosaic Virus (WSMV) has taken a toll on yields following the tumultuous weather during the growing season.

Disappointment is the theme of this year’s harvest for McPherson County wheat farmer Derek Sawyer. He started cutting wheat on Saturday and hopes to wrap up on Thursday, stating he has the fewest acres of wheat that he’s had for a while.

“The wheat is not yielding what it looks like it should,” he said. “The kernels are small.”

The cause of the disease pressure is primarily due to the growing season’s weather. Volunteer wheat didn’t emerge last summer under dry conditions but did emerge in early fall following end-of-summer moisture. This late emergence of volunteer wheat was not killed off, which harbored the wheat curl mite that carries WSMV. Other contributing factors include an increase in double-cropping and cover crops in the area — which Sawyer stated, “That’s here to stay.”

He expects his farm yield average will end up about 50 bushels per acre, better than what he’s hearing from south of his area near Inman, where wheat is averaging in the upper 20s to lower 30s. Test weights are a little above 60 pounds per bushel, and protein is ranging from 11 to 12 percent. The combination of poor planting conditions, a dry fall, a dry winter, extreme cold temperatures, too much rain and then extreme heat made for what he called “a weird year.”

In far southwestern Kansas, Keith Williamson just started harvesting in Seward County on Tuesday. Some fields are still pretty green, meaning he is having to skip around fields to catch where moisture levels are acceptable.

At the start of his harvest, moisture is still relatively high at 15.5 percent. Yields are averaging between the mid-40s to 60 bushels per acre with test weights at 61 pounds per bushel.

Keith’s nephew Calvin Williamson farms in Ford County, where the wheat is taller than the deer fawns running through the harvest fields. He also started harvest on Tuesday with yields averaging around 80 bushels per acre on summer fallow fields and test weights steady from 60 to 65 pounds per bushel. Protein is excellent at 13 percent.

Calvin also experienced disease pressure in some fields, despite applying fungicide when clear signs of stripe rust emerged. He and an agronomist also pulled samples from one field that looked particularly rough. Analysis by K-State showed the field had both Mosaic and Russian wheat aphids present, but Calvin was unsure of the source. 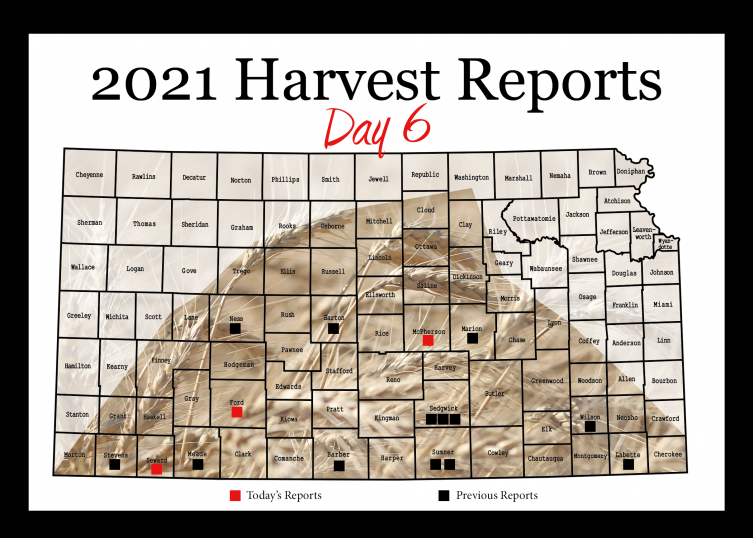