Kansas farm families spent Father’s Day weekend in the combine, a wheat harvest tradition. Hot, dry, windy weather signaled the continued rapid progression of harvest across the state. Some south-central Kansas producers have sunny harvest results to share while empathizing with farmers elsewhere that did not catch the same beneficial rains throughout the growing season. No matter the final yield or the holiday, farm families are working together to maximize the 2022 Kansas wheat crop.

James Mosiman had his Arizona landlord in the combine with him when Kansas Wheat staff stopped by the harvest field near Walton in Harvey County. Harvest results are good with yields at 53 to 78 bushels per acre, 14 percent moisture and test weights heavy at 61 to 62 pounds per bushel.

In the next field, son Justin was running the air-seeder to plant double-crop soybeans into the wheat stubble. The cutting and planting crew were joined by a load of kids from Boulder and Kansas City and their grandfather, all of whom piled out and climbed into the cab. The grandfather remarked the field trip helped his grandkids see where their bread comes from, yet another family harvest tradition.

In the same area near Walton, the Nuss family, alongside Troy Smith, worked together this weekend to get wheat in Harvey County harvested and straw baled for Smith’s cattle. The operation delivers straight to Ardent Mills in nearby Newton, making growing quality wheat a priority.

Harvest results thus far are strong with yields at 70 bushels per acre, moisture at 11.2 to 14 percent, test weights heavy at 62 to 63 pounds per bushel and protein at 10.5 to 12 percent.

Back in February - after an excruciating Kansas City Chiefs game - the family went and tinkered with a 1968 Case 660 combine sitting in the treeline. After taking out their frustration, they got it started. Motivated, they restored the machine to running condition, driving to southwestern Missouri to pick up parts from a collector happy to see them used. After sitting idle for close to 30 years, the old Case combine returned to the harvest field for a few passes.

Bonding over machinery and splitting up harvest and fieldwork responsibilities is a common theme in June. From the first day of harvest on Friday, Koby Royer, a senior at Kansas State University, was operating the combine while his older brother Alek ran the grain truck to and from the elevator. Koby helps out on the family operation in Yoder, Royer Farms, while working an internship in nearby Hutchinson.

Their morale is high, thanks to results from fields like the one they were custom-cutting in Reno County on Friday - 50 bushels per acre, 64.5 pounds per bushel test weight

and 13 percent protein. The brothers are thankful for the moisture they received but empathize with farmers further west that did not see the rain when needed.

Hayden Peirce is also balancing helping out on the family farm near Castelton and working a summer internship. Starting work at six in the morning in town, he can finish up responsibilities as an intern before hopping into the combine mid-afternoon. Peirce is also a college senior, pursuing a degree in biological agricultural engineering from Kansas State University.

Using the protein testing in the cab, Peirce is seeing high protein, ranging from 11 to 16 percent. Moisture is dry - 10 to 13 percent - and test weights are above 60 pounds per bushel. Yields are coming in the 40’s and 50’s bushels per acre. He praised the variety KS Hatchett, from the Kansas Wheat Alliance, for its drought tolerance, which was put to the ultimate test this year. He compared harvest results to Zenda, also from the Kansas Wheat Alliance, and Hatchett outperformed it.

Harvest is truly a family affair with Peirce running the combine while his cousins man the grain cart and semi and his oldest brother operates the planter - all pivotal pieces to getting all farm work done in June. 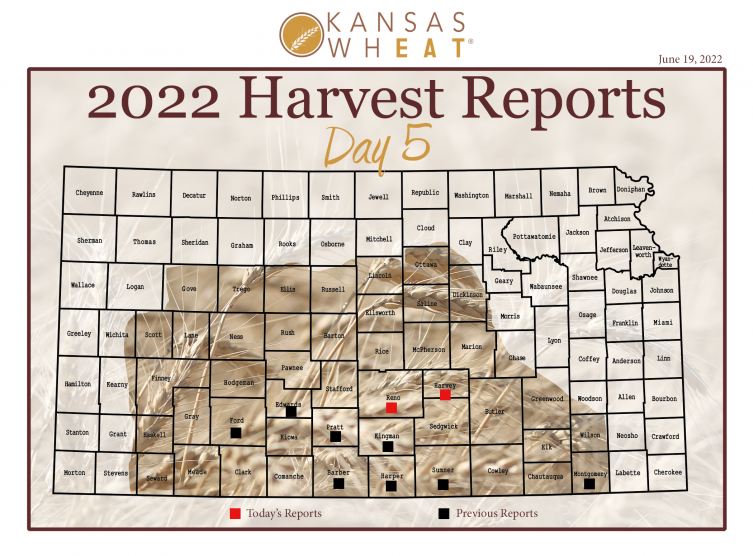