This is day 5 of the 2015 Kansas Wheat Harvest Reports, brought to you by the Kansas Wheat Commission, Kansas Association of Wheat Growers and Kansas Grain and Feed Association.

Praise for the late season rains keeps pouring in from around the state. Industry experts had pegged them the “million bushel rains,” but it looks like they have added even more to this year’s crop.

Steve Thummel from the Plains Equity Exchange & Coop Union said that the harvest near Plains, in Meade County, is around 45% complete. Area farmers are seeing 20-30 bushels an acre for dryland wheat while irrigated wheat is yielding around 65 bushels an acre. Thummel reported variable test weights that are averaging around 58-59 pounds per bushel. He estimates that this is going to be a close to average year, something that coop employees weren’t confident in until after the late season rains.

Ron Suppes, a western Kansas wheat farmer, reported starting his harvest in northeast Finney County on Wednesday. Yields are better than expected, with Danby, a hard white wheat, yielding about 50 bushels per acre. His average test weight is 65.4 with a moisture range between 9 and 10 percent.

Blake Connely from the Southern Plains Coop in Lewis, Edwards County, is reporting an area average between 40-50 bushels an acre. He estimates the area’s harvest is around 60-65 percent complete. Connely also said that test weights in the area are variable, with fields that weren’t sprayed for disease weighing 55-58 pounds per bushel, while other fields are weighing in at 60-64 pounds per bushel.

Connely also reports that protein across the coop’s locations varies. The Greensburg location is seeing a 12 percent average protein content, while the areas around Lewis and Belpre are testing at 12.5-13 percent.

The 2015 Harvest Report is brought to you by Kansas Wheat Commission, Kansas Association of Wheat Growers and Kansas Grain and Feed Association. 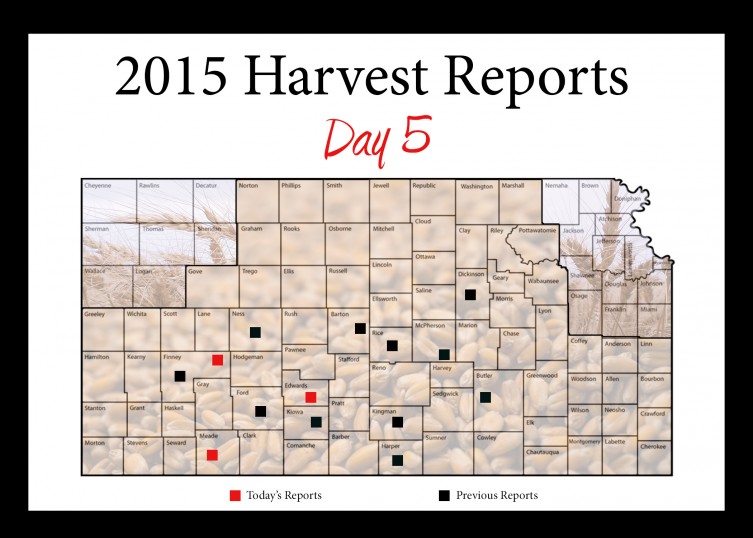